If you're looking for a smartwatch with a sleek design, the Skagen Falster 2 could be the one for you. Indeed, the timepiece resembles a traditional watch thanks to its stylish look, and its price just dropped to $123, 58% off its original MSRP.

The Falster 2 offers a complete set of internals, including heart-rate and GPS sensors, as well as an NFC chip. It's also swimproof, so you won't have to take it off when going to the pool or showering. Unfortunately, it's powered by the aging Snapdragon Wear 2100 processor, but the price drop makes the deal quite interesting.

Sadly, the offer is only valid on the Grey version with the metal strap. This very variant was already selling for $199 but just dropped another $76. The other versions aren't discounted, though, and you'll have to pay full price if you were thinking of getting the watch in another color.

Screamin' deals don't last long. This has already sold out over at Amazon, though there are still a couple (read: exactly two) Amazon Warehouse return units selling for around $110 if you're alright with open-box potentially used items. However, if you're alright with buying it at another retailer, it's still $123 from Skagen directly, so you can still pick one up. 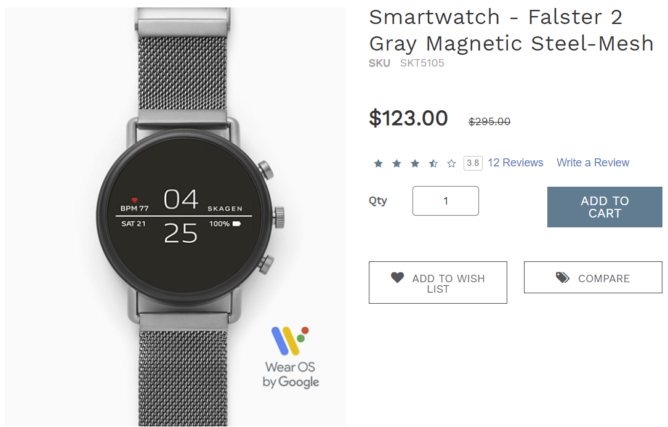