Over the last couple days, some tweaks to the Messages app on Android have been spotted in testing, updating the iconography and style in the message composition area to more closely match Android Q's outlined aesthetic. Also of note, Messages now supports transparency behind the new gesture bar in Android Q, though we can't be sure when this change happened.

The changes start with new icons for both attaching items and photos, as well as the send arrow on the right: all of these icons now use the heavy outline style favored by Android Q. The text entry field itself has also picked up a thick line border that more closely fits with the outlined look. Other icons, like the video/voice call icons visible in these screenshots at the top of the contact view, are still in the older solid style, which is a little inconsistent.

(Note that although our screenshot of the new icons shows "Chat" message vs. 'Text" message on our own devices, we have other reports that indicate the presence of RCS/Chat makes no difference, we just don't have a lot of images to work with.)

None of our devices see these changes, and we've tested multiple versions (including the recent betas), but reports indicate a smattering of folks do have it on 4.6.375, the current stable version. YMMV, but you can try your hand with the latest stable and beta at APK Mirror if you like. 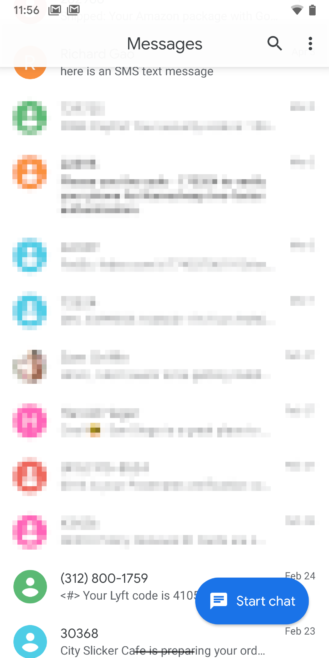 We can't be sure when it happened since it could have been controlled by a server-side change, but Messages also got support for transparency with the new gesture navigation bar, showing content behind the bar without blocking it, as most apps still do. Google's documentation doesn't make it sound like the transparent effect is too difficult for developers to add, but the team working on Messages appears to be ahead of the curve.

We tested older versions of the Messages app, and everything after 4.6.369 now supports it going back as far as Android Q Beta 3, so either it slipped under all our collective radar for the last month, or it was remotely enabled more recently. Either way, it should probably be present on your device so long as you're running a gesture-enabled Android Q beta and a recent version of the app — downloadable at either the Play Store or at APK Mirror, for your convenience.

[Update: Response] Turkish manufacturer distributes software image from XDA Forums for its own ...