Most ANC headphones on the market, Sony's own WH-1000XM3 included, are fairly neutral-sounding. But given how popular Beats headphones are, it was only a matter of time before a bass-focused ANC offering popped up in the market. The WH-XB900N Extra Bass caters to that specific audience, and at $250, it undercuts the 1000XM3's MSRP by $100.

However, the XB900N feels like it's lost a lot more than that $100 in value when compared to the 1000XM3. It's worse in every measurable metric, and not just by a little. Consider the recent discounts that have brought the 1000XM3 to sub-$250 prices, and you can quickly see that it doesn't make much sense to recommend the XB900N at all.

At a glance, you'd be hard-pressed to distinguish the XB900N from the 1000XM3. Unsurprisingly, they share a similar design, but you can immediately tell that Sony cut corners with the XB900N when you get up close. Gone are the 1000XM3's neat metallic branding and accents, as well as the subtle color-matching of the metal headband. Instead, you're left with some large "SONY" text on the left side of the headband. None of these are big deals; after all, this does retail for $100 less than the 1000XM3. 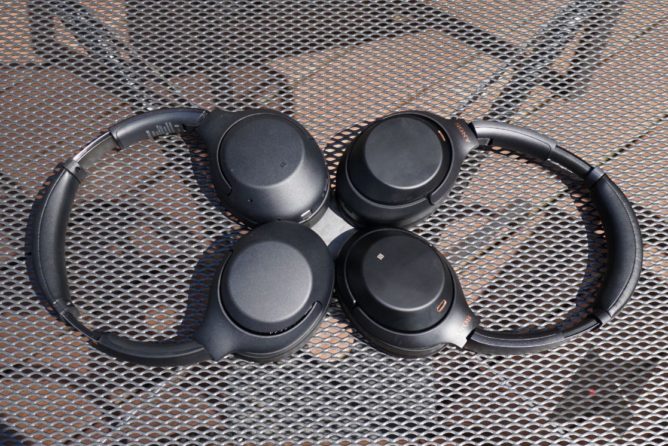 Pick the XB900N up, though, and I can almost guarantee you'll be disappointed. Sony chose to use possibly the cheapest-feeling material known to man: textured hard plastic, making this $250 set of headphones feel like they should cost a fifth of that. This is probably my single least favorite aspect of the XB900N; I'm sure it makes them more durable and resistant to scratches, but it just feels so, so cheap. Once they're on your head, though, they're only slightly less comfortable than the 1000XM3. I have a pretty big head and didn't feel like it was being excessively squeezed with the XB900N on, which is nice. 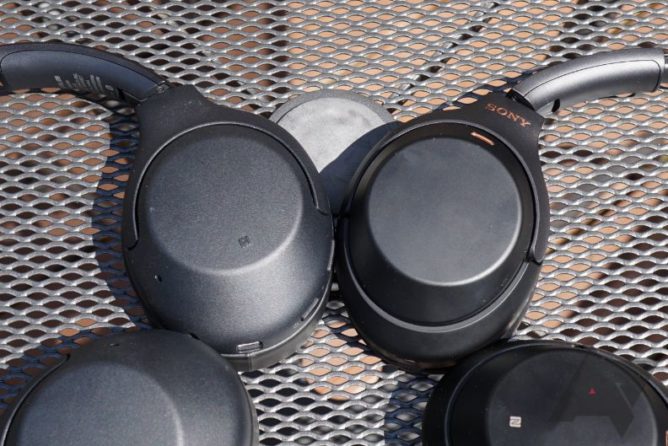 The XB900N uses the same touch controls as the 1000XM3, and they're just as intuitive here. The only downside is having to put your fingers on that trashy-feeling plastic. I haven't really had many issues with the swipes and taps being unreliable as I did with the 1000XM3, but I would imagine it suffers from the same extreme cold temperature issue unless Sony fixed it.

These cans are rated at 30 hours with ANC on, or 32 with ANC off. That's an excellent figure that is on par with the 1000XM3's, though the ANC off figure is a few hours shorter. Like the 1000XM3, the XB900N uses USB Type-C, but it unfortunately doesn't have the same quick-charge feature. 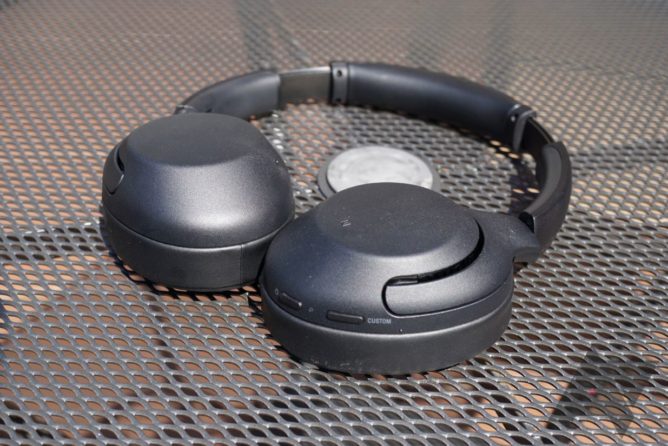 In the box, you get a bag for the headphones (not the nice hardshell case that comes with the 1000XM3), as well as a 3.5mm cable and an airplane plug adapter. It's available in black (pictured here), dark blue, and grey.

Sony is serious about these being bass-heavy, which isn't surprising given that the official product name is "WH-XB900N Extra Bass." I can confirm that there is a ton of bass — too much for my liking, but there's certainly a market for all the extra low-end frequency (ahem, Beats). However, the bass itself isn't crisp and definitely leans more towards quantity than quality. I would go as far as to call it muddy. 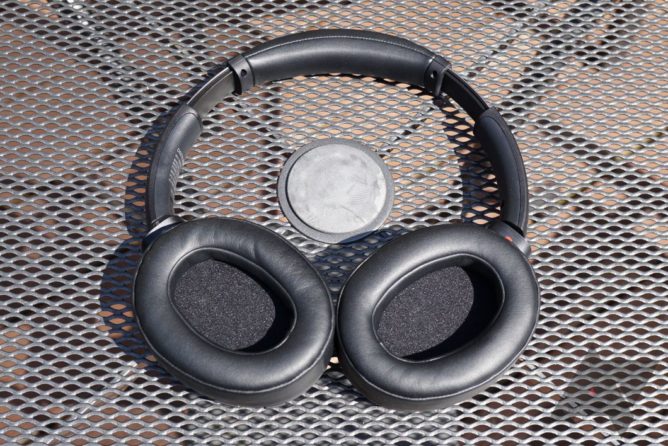 The sound on the XB900N is nowhere near as clear or natural as that of the 1000XM3. Combined with the overpowering and muddy bass, the sound just seems muffled and unrefined in general. I suppose this isn't all that surprising given the price gulf, but it's definitely something you should be aware of.

Noise cancellation is another area in which the XB900N falls short of the 1000XM3. If you're just sitting somewhere relatively quiet, the difference isn't too noticeable, but there is definitely a palpable downgrade in louder environments. I didn't get a chance to take these on a plane ride, but I suspect they wouldn't perform as well as the 1000XM3 there either.

The XB900N is supported by the same Sony companion app as the 1000XM3. You can click here to read about that, but in short, it's probably the best audio accessory companion app I've used. It offers a ton of customization for the noise cancellation, as well as an EQ for the sound. It is worth noting, however, that the airplane noise cancellation adjustment is missing here. If the default amount of bass somehow isn't enough for you, you can pump it up to +7 with the "Bass Boost" preset. With this preset, the bass will basically start shaking your whole head and ruin songs, but maybe there are some folks out there who would use it. 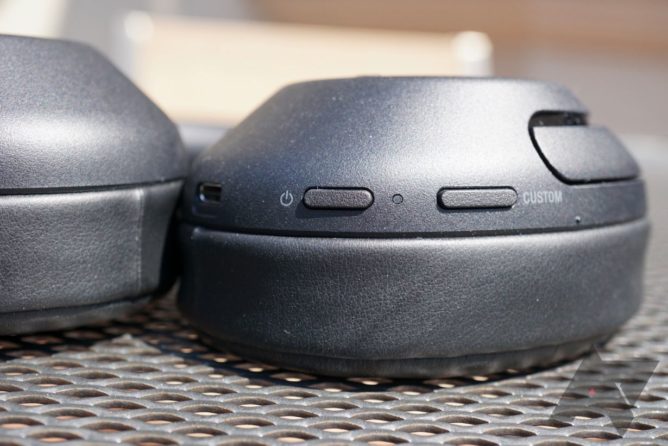 Overall, the XB900N's sound is mediocre at best. Both it and the noise cancellation are a marked downgrade from the 1000XM3, arguably more so than the price difference would lead you to believe.

No. Even though the XB900N's $250 price tag is $100 lower than the 1000XM3's, it feels like far more than $100 of value has been taken away. The hard textured plastic casing feels very low-quality, the sound is much less clear, the bass is too blunt, and the noise cancellation doesn't block out as much noise. If I were considering buying one of these two sets of headphones and got some hands-on time with both beforehand, I would happily pony up the extra $100 for the 1000XM3. 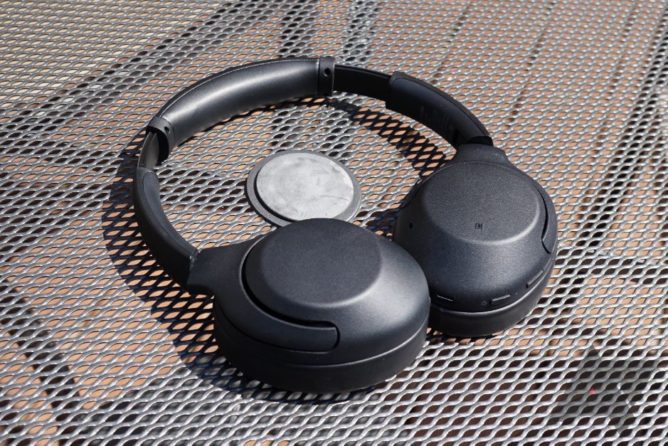 But here's the thing: recent discounts have brought the 1000XM3 down to as low as $238, or even $200 if you're okay with a refurb. That means that you can have a pair of the excellent 1000XM3s for even less than the vastly inferior XB900Ns. And if you really, really love listening to music with a ton of bass, you can simply crank the bass on the 1000XM3's EQ to the max and enjoy a much cleaner low-end with about the same amount of thumping as the XB900N's standard setting.

If you've been considering the XB900N, stop it and buy the 1000XM3 instead. It's better in every way.