In the gaming world, displays with higher refresh rates are coveted. Last year's ASUS ROG Phone came with a 90Hz display, so we're not all that surprised to see confirmation that the ROG Phone 2 will have a 120Hz unit. This beats out the OnePlus 7 Pro's 90Hz and matches the Razer Phone 2's rate. 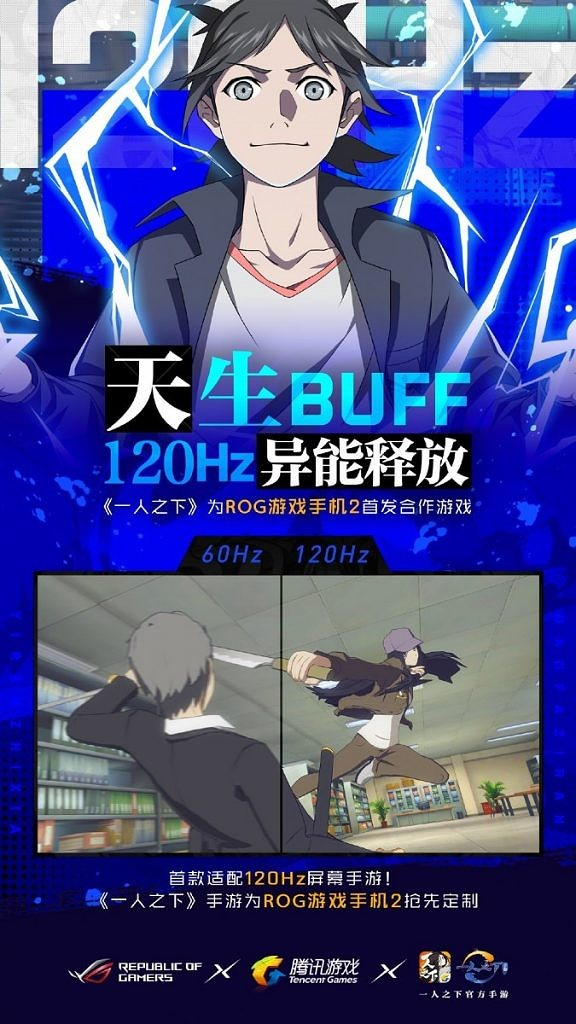 This first bit of news about the ROG Phone 2 comes courtesy of ASUS's Weibo account, which announced a partnership with Tencent's "Under One Person" webcomic-based game. This game will be the first to fully take advantage of the upcoming phone's 120Hz display, but more games fully utilizing the display are planned. The announcement also featured a photo comparing 60Hz and 120Hz graphics, though we're not sure how ASUS expected that to be conveyed in a still image.

Given that the first ROG Phone was unveiled in June of last year, we can probably expect its successor to make its debut sometime soon. Hopefully, the gamer-focused design has been toned down for this second iteration, but we're not holding our breaths.

ASUS has also revealed that the upcoming ROG Phone II will be using Qualcomm's just-announced Snapdragon 855 Plus, like we speculated. The gaming-centric device should benefit from the slight bump in speed and graphics. There's still no word on when the ROG II will debut, but we should hear more soon in the coming weeks.

A pair of real-world photos claiming to be of the upcoming phone has leaked on Weibo: 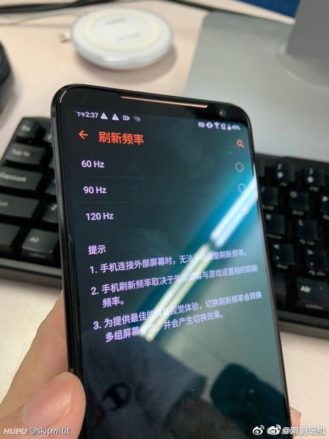 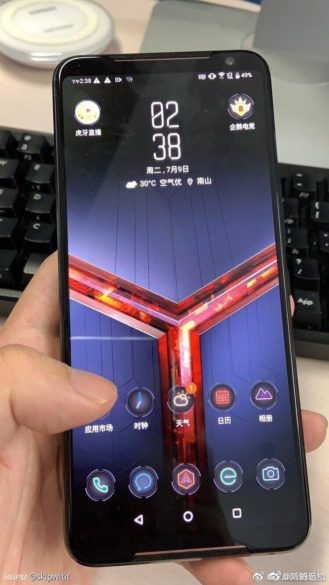 The overall aesthetic seems to match the previous ROG phone, with similarly shaped cutouts for the front-facing speakers, though they're a bit less ostentatious when it comes to accents for the grilles. Screen size looks a little bit larger (or the bezels are smaller), and the rounded-off corners of the display appear to have a bigger radius.

Settings options showing three available refresh rates in 30Hz steps from 60 to 120. No photos of the sides or back have been shown off (yet).

Photos of back and sides

More photos from China's TENAA regulatory agency have been spotted, finally showing off the sides and back of the phone. There's no visible fingerprint sensor, so either the phone doesn't have one, or it has been moved into the display. GSMArena (of much smartphone spec fame) was able to spot some specs somewhere on the agency's website that we can't find, including a 6.59" display size and positively humongous 5,800 mAh battery. Dimensions clock in at 170.99 x 77.6 x 9.78mm.

Spec table based on TENAA data

More specs for things like the camera have dribbled out from the TENAA listing (and we were able to track down a URL for the full regulatory information), so we've assembled a spec table just below with everything we now know:

Get Google Assistant on your Samsung Galaxy smartwatch with GAssist