Sony still relies on gimmicks to sell its phones, and the gimmicks in this instance don't add to the experience. There's the 4K screen, which doesn't look any better than the lower-resolution OLEDs on the market. And what about the 21:9 screen ratio? It actually makes the phone harder to use in some instances, and the buttons are awkwardly crammed together despite all that extra space. Meanwhile, the camera with its fancy BIONZ and Alpha branding manages to be acceptable but not amazing. It all adds up to a good phone that I wouldn't recommend buying at $1,000.

The first thing you'll notice about the Xperia 1 is that it's a long, long phone. It's about as wide as the Pixel 3a, which has a 5.6-inch 18.5:9 display. The Xperia 1 clocks in at 6.5-inches (measured diagonally) with a 21:9 ratio. So, it's like an ultra-wide PC monitor or a cinematic widescreen film but vertical. I do appreciate this sometimes, like when I'm scrolling through long lists or text-heavy web pages. However, it makes the top of the screen difficult to reach even for those with large hands. I would advise using a case with the Xperia 1. 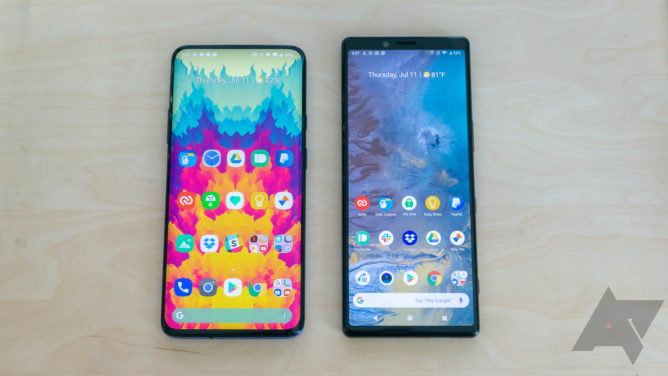 Compared to the OnePlus 7 Pro (left).

The glass back is very slippery, as is the mirror finish on the aluminum frame (it's IP68). It's easy to lose your grip, especially as you struggle to tap something up near the top of the giant screen. I appreciate that Sony didn't force a notch on this phone, nor did it use the bottom-shifted display like the Xperia 10. You've got modest bezels at the top and bottom, but the top is noticeably larger. The asymmetry bothers me a little, but it's not egregious.

Sony is fond of talking up the 4K display resolution on this phone, but it probably doesn't have as many pixels as you'd expect. Because of the stretched ratio, the OLED is 1644 x 3840 (4K TV is usually 2160 x 3840). That's not to say I'm disappointed by the number of pixels—on the contrary, this is more than enough. There is zero benefit to 4K resolution on a smartphone. It doesn't look any better than a 1440p display of this size. Here, it only serves to increase the price and decrease the battery life. The display is sufficiently bright for outdoor use, and the colors are vibrant. If you want more accurate colors, Sony has a "Creator Mode" for more realistic tones. 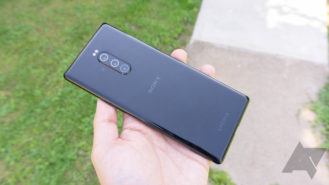 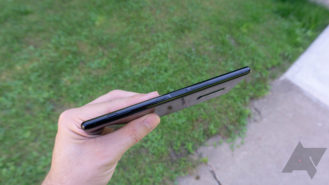 You'll find the Xperia 1's sole port, a USB Type-C, on the bottom edge. You'll have to use that for audio and charging—there's no wireless charging, either. The Xperia 1 has nothing on the left side, but Sony crammed everything on the right. There's a volume rocker, power button, fingerprint sensor, and camera button. Oddly, the power button is closer to the bottom than the top, right below the separate fingerprint sensor. I don't understand why these aren't combined like on past Sony phones because it makes the phone rather awkward to use. The location of the fingerprint reader in the middle also makes it far too easy to trigger accidentally. To make matters worse, the Xperia 1 doesn't vibrate to indicate a failed read. I can't count how many times I've tried to unlock the phone only to find out I'd mistakenly touched the sensor too many times while carrying the phone around.  The sensor is also among the slowest I've used on a high-end phone. 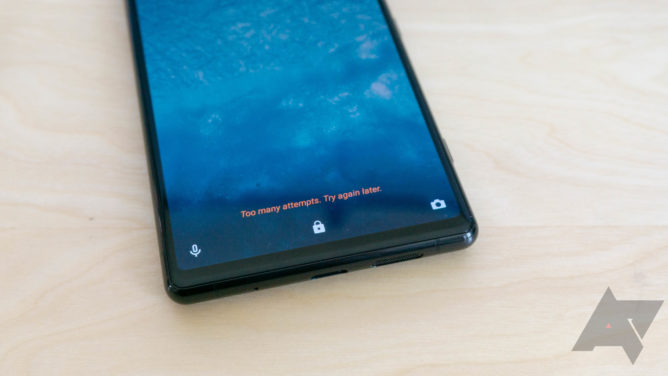 So much of this.

There's nothing unexpected or luxurious in the box with the phone. You get an 18W wall charger, USB-C cable, headphone adapter, and headphones (depending on market). I would really have liked to see a basic case of some sort in the box considering how slippery the phone is.

Sony deserves credit for sticking with a clean build of Android 9 Pie. There are very few pre-loaded apps, although they are mostly unnecessary. Sorry, Sony, No one is going to use your email app. The home screen is basically the Pixel Launcher by a different name. It has the bottom search bar, swipe-up app drawer, and Google Discover/Feed on the left. The app grid is also six icons high thanks to the 21:9 screen ratio.

Unfortunately, most of Sony's attempts to add features to Android fall flat. Case in point, the bizarre Side Sense gestures that debuted on the XZ3 have returned. This pop-up UI gives access to app shortcuts, split-screen, and more. You can trigger Side Sense by double-tapping (or swiping) on the edge of the screen, but it's incredibly unreliable. Even knowing exactly where to press, I'm only about 75 percent successful triggering it.

This is a Snapdragon 855 phone, so it does not want for speed. Apps open quickly, and the UI feels fluid while swiping and scrolling around. There are a few hitches in performance that I'd chalk up to poor optimization. For example, the device feels sluggish immediately after unlocking but just for a second. There are also some camera issues that I'll get into momentarily.

The Xperia 1 only has a 3,300mAh battery, which is quite a bit smaller than many competing devices in 2019. With that 4K screen and high-end SoC, the battery life is predictably mediocre. With heavy use, I've been getting around five hours of screen time over a day. It's usable, but you might find yourself in need of a quick recharge before heading out in the evening. A faster charging option might have been nice in light of the small battery, but it's just typical USB-PD 18W.

Sony makes the image sensors used in some of the best camera phones, but the world has changed a lot in the last few years. The quality of your camera is no longer dependent almost entirely upon the hardware—computational photography is the future, and Sony isn't competing on the same level as Google and Samsung. That's not to say the Xperia 1 is bad as a camera, but it's not the sort of experience you'd expect from a phone with a dedicated shutter button. 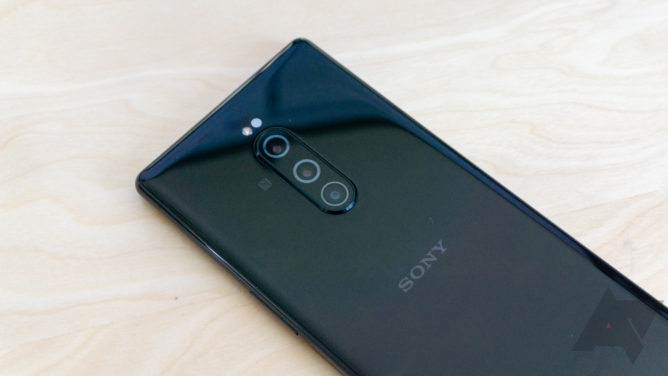 An overarching issue with Sony's camera is speed. The camera app is slow to open, slow to capture, and slow to process. You could say the same on the last count when it comes to Pixel phones, but the results are phenomenal. On the Xperia 1, the photos are just average. I have, in the past, proclaimed Sony phones among the best you could get for photo capture. Those days are gone, and Sony is now in the middle of the pack.

In bright outdoor conditions, the main sensor pulls in a ton of detail, and the results are good. As light dims, the camera gets startlingly slow. I was often faced with pop-up notifications asking me to wait while the phone captured images, and this was without switching to any low-light photo modes. The Xperia 1 seems to prefer longer exposure times, which blur motion. On the other hand, the lower ISO reduces noise. The wide-angle camera can take some cool photos, but its utility is somewhat limited. The default settings use the full 130-degree field-of-view (FOV) at 12MP and 16mm. That's a very wide frame, and the edges of the photos are quite distorted. The alternative image mode crops the resolution and narrows the FOV, but I think the photos turn out better overall. Sony's zoom photos are also a bit questionable. The 12MP 26mm sensor does get you closer to the subject, but Sony's processing is, again, suspect. The details end up looking somewhat soft and fuzzy at times—it's very similar to current Samsung phones.

Probably not. The Sony Xperia 1 is not a bad phone, and it is an improvement over Sony's past efforts. I want to like this phone, and in a lot of ways, I really do. The performance is snappy, and it's a physically attractive device. The taller screen ratio has some utility, although it's a novelty unless you spend a lot of time watching 21:9 video. Sony's move to OLED panels is appreciated, 4K or not. I also like Sony's mostly stock take on Android. 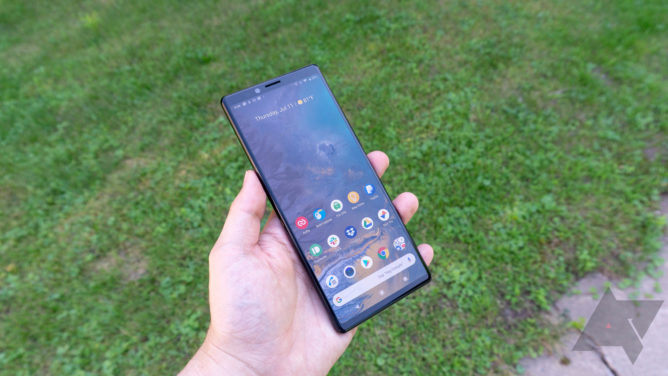 The primary issue is how the Xperia 1 compares to competing phones in 2019. The camera is not as good as flagship phones like the Pixel and Galaxy S10, and even mid-range phones like the OnePlus 10 Pro can best the Xperia 1 at times. The battery life is also short compared to other phones; Sony might point to the 4K display as a selling point, but that simply does not matter on a 6.5-inch display. The OLED looks great but no better than 1440p OLEDs.

Sony's asking almost $1,000 for this phone, the same as the Galaxy S10, which works on all carriers. The OnePlus 7 Pro works on GSM carriers plus Verizon, and it's at least as good in daily use. The OP7 Pro starts at under $700, too. That's what Sony has to compete with in 2019, and it hasn't sealed the deal.

YouTube Premium and Music launch in 13 new countries, now available in more than 60