Going into Prime Day, the rumored Nintendo Switch deal tantalized us the most. Details weren't known, but with discounts on Nintendo's latest console being so few and far between, almost any price cut would have been welcomed. In the end, Amazon elected to sell the Switch for its usual $300 price but with a $35 eShop Gift Card, which is alright, but the current promo on the "New" 2DS XL seriously steals that deal's thunder.

(I know, I know, Android Police, whatever. Many of our readers asked for info about the Nintendo Switch sale, so we thought some of you might also be interested in this.)

While the Nintendo Switch might be the new hotness, there are still plenty of great games for the 3DS/2DS, and Nintendo still remains adamant that the Switch Lite isn't a "replacement" for the 3DS/2DS. The New 2DS XL usually runs around $150, but unlike the Switch, Amazon is offering a substantial discount, slinging them right now for a mere $130. And you don't just save $20 over the usual price, you even get two free games with it. 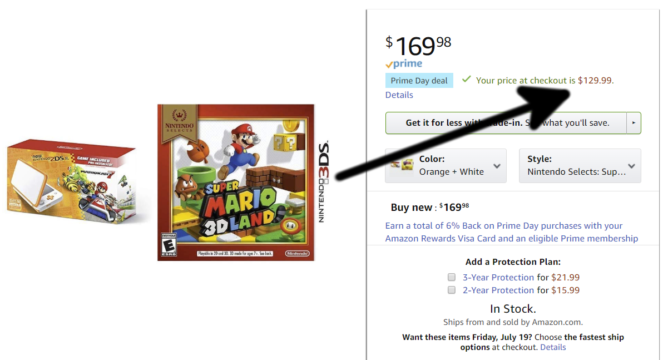 Amazon really likes to hide the discounts this Prime Day.

All the discounted bundles include a New 2DS XL with Mario Kart 7 pre-installed, and you also get your choice of one of nine so-called "Nintendo Selects" games, downloadable via a digital code. Options include Ocarina of Time, Majora's Mask, Super Mario Maker, and Donkey Kong Country Returns 3D.

Whether you're picking one up for yourself, a sibling, or even a niece/nephew, it's a pretty good deal. The only potential disadvantage is the color available right now:  "Orange + White"  is your sole option, so hopefully the creamsicle look does it for you.