Google Assistant has quickly grown from a simple voice control app to a full-blown product that encompasses many elements of Google's software strategy, proactively providing people with data about themselves. After showing off the super-fast, hardware-specific next-gen Assistant at I/O, Google is still looking to improve the experience for everyone. It appears that the company is working on bringing Assistant updates to the Ambient Display.

When taking a look at the Google app APK 10.16, 9to5Google found some interesting strings that refer to the Assistant displaying updates on the Ambient Display. These include the greetings that sit at the top of the standard Assistant updates screen, but also more useful additions like an overview of your agenda, commute durations, and currently playing music, as well as a Do Not Disturb indicator.

Somewhat more advanced is the option to see and set alarms right from the Ambient Display mode. That goes beyond simply providing information, and I wonder if it'll lead to some involuntary alarms due to accidental screen taps, which do happen right now (though Google is working on palm rejection on Always On Display to stop them).

<string name=”ambient_no_alarm_summary”>You have no alarm set for the next morning.</string>

Seeing Assistant updates on our Always On Displays would greatly enhance the discoverability and accessibility of the Google Now successor. Right now, it's hidden away behind a swipe-up on the Assistant's interface, which is far less reachable than the ideal space in the left home screen pane Google Now sat in before it was replaced by the Discover feed there. 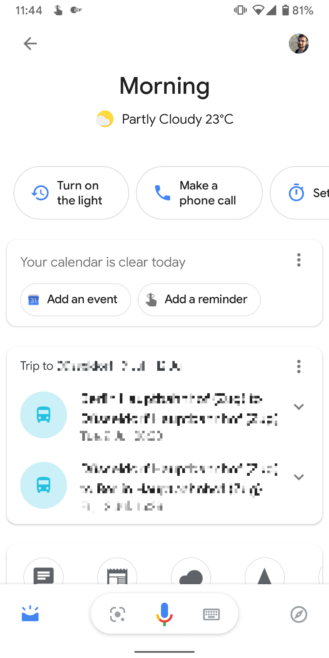 We might see a reduced form of these regular Assistant visual updates on the AOD.

In case the AOD functionality gets activated through a server-side switch, you can try your luck by downloading the latest Google beta from APK Mirror or by heading to the Play Store through the widget below and signing up for the beta program, if you're not using it already — keep in mind though that a beta isn't 100% stable, by definition.

9to5Google managed to activate the ambient Assistant on version 10.24 of the Google app. The interface resembles the Assistant Updates tab, which you can see in the original article above. It shows up instead of the usual AOD screen, but you can still return to that by tapping the clock in the new design.

In future builds, additional cards should show up below the temperature and the greeting. Our friends could access them only independently at this stage of development. These cards behave just like their counterparts in the regular Assistant layout on smart displays. They allow you to control media, and you should get additional updates through them instead of the place holders you see below at the moment. All of this is still work in progress, as you can tell from the black letters on dark background.

9to5Google further believes that this ambient Assistant most likely won't replace the regular AOD – instead, they assume that it could supplant the rather limited interface that shows up while charging a Pixel on its dedicated Stand. We can only hope that Google opens up the experience to other Qi chargers, and maybe even wired charging once this goes live.