Quite a while ago, along announcing the new Android Auto experience, Google also said that it would deprecate the interface for phones completely. It encourages its customers to use Assistant Driving Mode instead, which is poised to come out "this summer." Android Q is apparently already preparing for this, as some users on the latest beta report that the Android Auto app icon is disappearing for them, with no option to start the app from their phones anymore.

A Redditor noticed the lack of Android Auto in his app drawer — the application just couldn't be found after updating to Android Q Beta 5. When he searched for it on the Play Store, it showed up, but only with an option to "uninstall all updates to this Android system app" and no way to launch it right on the phone. 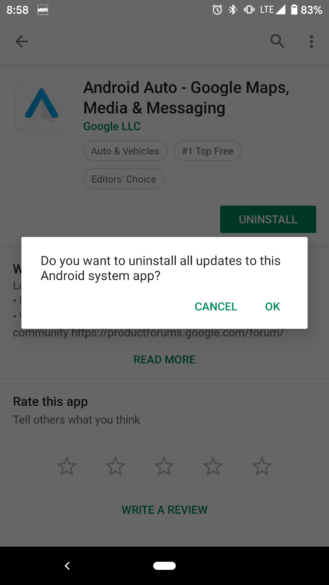 Interestingly, the app isn't gone for everyone. In the Reddit thread, many people report that Android Auto is still there for them, and I can confirm that it's accessible on my Pixel 3 running Q Beta 5. The lack of a launchable app doesn't mean that Auto is completely gone though — it should be possible to connect your phone to your car's infotainment system and use it there, provided your vehicle supports Google's software.

We can still look forward to the new Assistant Driving Mode though, which appears to be a promising replacement for Android Auto. Let's just hope that it doesn't take a couple of years for it to reach feature parity with Driving Mode, just as the Google Play Music and YouTube Music situation has taught us. Of course, the dissappearance of Android Auto might as well just be a beta issue, not related to the upcoming driving mode at all.