Even though YouTube has long become a multi-million-dollar business, individual creators can sometimes still end up struggling when they rely only on the built-in ad revenue (SnazzyLab's Quinn Nelson has a great explanation on this, if you have an hour to spare). Google sees these problems and is looking for ways to help YouTubers diversify their income. At VidCon, the company announced that it adds multiple tiers of Channel Memberships, extends Super Chat with purchasable stickers, and adds new native merchandise options.

Super Chat is a feature that allows commenters to stand out in chats during live streams by paying a small fee per message that makes it more visible over a longer period of time. Now it's also possible to purchase animated "Super Stickers" starting at $5. Super Chat appears to be working great for the 90,000 channels who've received the feature, as their revenue increased by 65% over the last year.

Going forward, creators will also be able to make up to five different Channel Membership tiers and define varying perks for each, similar to Patreon. YouTube says it tested this with the Fine Brother's REACT channel, among others, which now receive more than six times the revenue as before. Of course, members also benefit from additional videos and other goodies, so it's of mutual interest.

Last but not least, YouTubers can now offer merchandise from stores other than Teespring, with Google announcing Crowdmade, DFTBA, Fanjoy, Represent, and Rooster Teeth coming on board. These merchandise partners' offers now also sit right below videos on the mobile app.

Another more altruistic option found its way into the platform, too. Creators can ask for donations for fundraising causes through YouTube Giving, a service that is now moving out of beta in the US. It allows viewers to offer money right through the YouTube app itself. 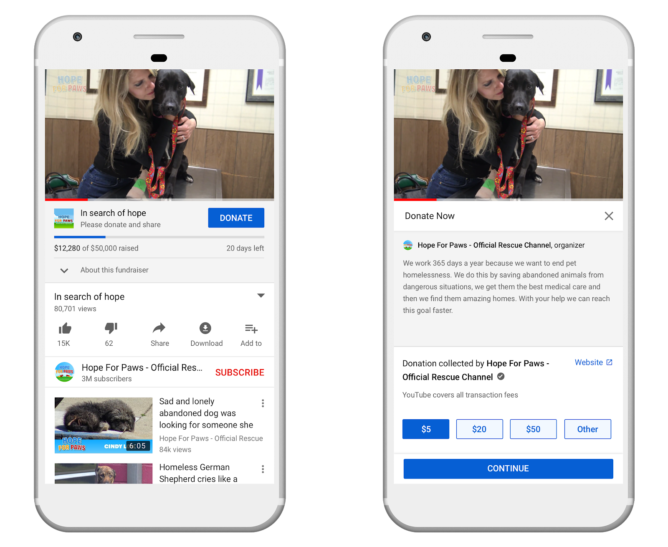 Overall, these tools are much needed to make sure creators can keep making their content sustainably. Conveniently, YouTube offers some tools that were previously already used by YouTubers outside of the platform itself, binding content creators closer to it – and of course, the video streaming service also takes a cut from membership and chat revenue.