The latest version of Google Voice is available and it's bringing both cosmetic changes and making preparations for new features. For those that use Voice with multiple accounts, the account switcher has been repositioned to a more convenient location. A teardown also shows upcoming support for vCard attachments and Android's Car Mode, which will make it easier for users to make calls with Google Voice while driving.

Google's approach to app design has gone through many changes over the years as trends come and go. With the transition into the latest incarnation of the Material Design guidelines, many of Google's own apps have migrated away from having an account switcher located in the navigation drawer and now position it in the top right corner, often as part of a search bar. 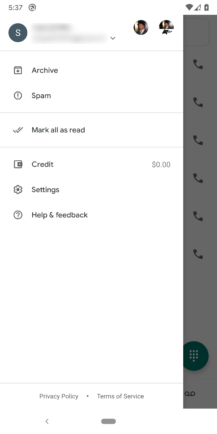 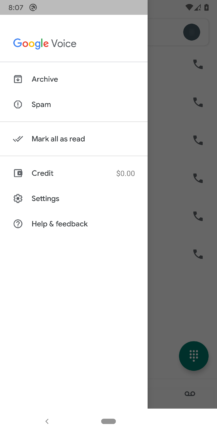 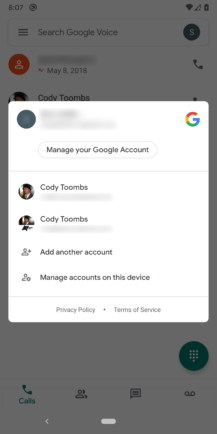 With the latest update, Google Voice joins the pack. You can now find your account avatar in the now standard position at the top right. Tapping on it brings up a dialog box instead of sliding any part of the UI down to reveal accounts.

Google hasn't always put a lot of effort into the various incarnations of Driving Mode (sometimes called Car Mode) on Android. This is the special UI that a phone could go into so apps would show a different, and usually more glanceable interface. However, with the announcement that new version of Driving Mode with tight Assistant integration was in the works and would replace the Android Auto (on the phone) interface, it seems like there's a renewed effort to get a few new apps to provide their own car-oriented capabilities.

Google Voice is getting in on the action with  support for Driving Mode. At this point, the implementation only appears to support the ability to make calls with Google Voice.

Turning to the messaging capabilities of Google Voice, it looks like vCard support is also in the works. At least that's the clear implication from the new line shown below. This should allow attachments in vCard format — a standard for contact details — to be read and used for adding contact information to your phone, like phone numbers and email addresses.

There really isn't much to say about vCard support, but if you want to read my best effort to say more, here's a teardown of Google Allo from a couple years ago when the same thing was happening in there.