The A10e isn't winning any competitions when it comes to hardware, it's got budget phone specs at a budget price, supplemented by a decidedly non-budget design. While you do have a small chin at the bottom of the screen, the appearance is otherwise reminiscent of flagship phones from the last year or so, with a teardrop-style notch on the "Infinity Display" and a (mostly) edge-to-edge screen. 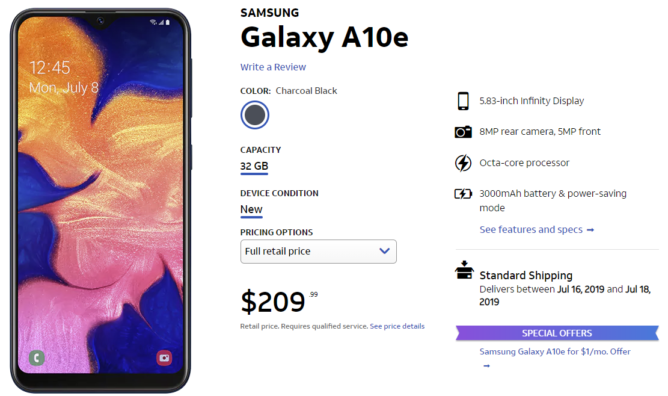 So far only AT&T has picked up the A10e. Although Samsung's site also has a listing (curiously at a lower price), it is also for the AT&T model, and doesn't point at any retailers yet.

The Micro USB interface for charging is an anachronism in 2019, but typical for budget-minded devices. It even had a headphone jack (according to Samsung's listing, anyway).

Interested parties can seemingly order one from the carrier as of now, with delivery set for next week, and there's also a special offer which brings the price down to just $1 a month via bill credits if you activate on a new line.