If you noticed that "Something is technically wrong" when you went to tweet just now, it's not just you. At the time of writing, Twitter seems to be down. Neither desktop app, nor mobile site, or even the Twitter Android app can connect to the service. You'll have to get your next dose of narcissism via Facebook.

Mobile app and site both having issues, as is desktop (error message pictured further above).

At the time of writing, Down Detector's crowdsourced incident reporter is exploding with complaints of outages — and the flood of thousands of comments being posted have more in common with a high-view Twitch chat than anything else.

The Twitter API Status dashboard indicates that the company is currently investigating the issue. An active incident was opened at 6:58 PM UTC (around 3PM ET, noon PT) though an explanation has either not yet been found, or is not forthcoming. 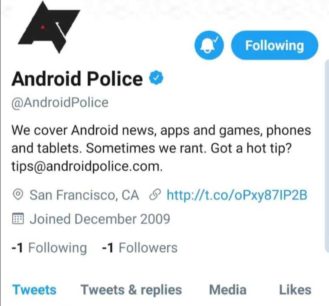 If you're lucky enough to get a page to load, you may find your account has a negative number of followers (or AP readers have simply wised up and moved to Mastodon like Corbin always wanted).

Other intermittent outages for services including Reddit have been reported today, with Down Detector's recent activity showing more reports and irregularities than usual for this time of day.

If any new information regarding the outage is forthcoming, or Twitter service is restored, we'll let you know.

Over the last few minutes, Twitter seems to be slowly coming back for us here at AP. The ability to view tweets came back before the ability to send them, though everything seems to be functioning at the time of writing.

The incident is still open, though.

The incident reporter says it has identified the issue. Twitter is now available for some users, and it is working to restore availability for all.

Chrome OS may be picking up Chromecast's ambient mode screensavers