Google has officially announced dark mode for Android Q at I/O and has updated the Material Guidelines telling developers how to properly implement the theme in their apps. But of course, there's always going to be some apps that simply won't receive a gray look, be it because it's abandoned or just not a priority to the developer. To test how the OS could circumvent these, Q Beta 3 introduces a brute method that forces all apps into dark mode.

The feature is available in the developer settings or by searching for the keyword override force-dark (after first opting into developer settings, naturally). When the toggle is activated, all interface elements on your screen receive intelligently reversed colors, similar to Chrome's experimental dark mode tests at the beginning of the year. For some apps, this ends up looking neither good nor functional, but take a look yourself. As you can see, it's hit or miss for now. Bad examples include Telegram and Whatsapp, with both not really going dark, and Telegram's text becoming unreadable. But I like the way the Google app and Instagram look and hope for a similar official implementation soon. WebViews and Google Chrome remain completely untouched by this mode. 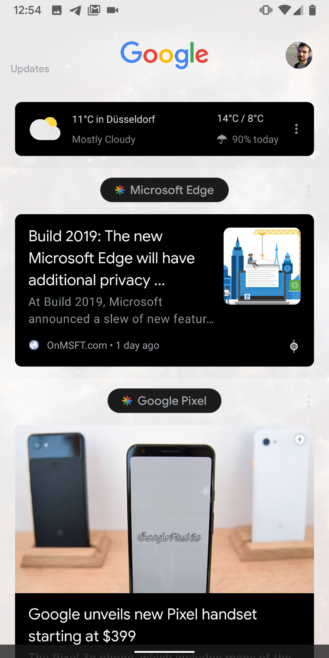 Right now, the forced theme also interferes with the standard white mode, as whites end up staying inverted here, too. This is the case for Google Feed, among others. Obviously, this feature is still a work in progress and might very well disappear or improve before Android Q launches later this year.

With #AndroidQ, developers have access to tools that make it easy to test and analyze Dark Theme app creations. #io19 pic.twitter.com/QlSlKba9Rt

This feature is partly broken as of Q Beta 4. Trying to enable the setting in developer options merely results in a crash, booting you back out as the setting remains toggled off. Presumably, this will also affect the "alternative" slightly-tweaked dark mode we spotted (which was probably a bug).

Kieron Quinn was able to get it working in this latest build, but it requires root. Instructions for the curious are available here. Also note that for it to work now, you'll need to have both "override force-dark" and the dark theme toggle in Settings -> display enabled. It's also possible that the setting toggle breaking is a precursor to the setting's future removal.

The force dark mode option works again on Android Q Beta 5 and no longer crashes when enabled. 9to5Google also reports that it doesn't affect some Google apps anymore, like Assistant and Maps.