At today's announcement of Android Q Beta 5, Google revealed that it was going to move custom launchers off of the new gesture navigation system as of Beta 6, defaulting to the old three-button method if you use one. While that might sound like a reason to worry, this change is merely an "an unfortunate, yet short-term inconvenience" in Action Launcher developer Chris Lacy's words. Google has confirmed it will bring gesture support for third-party launchers "in a post-launch update" for Android Q. 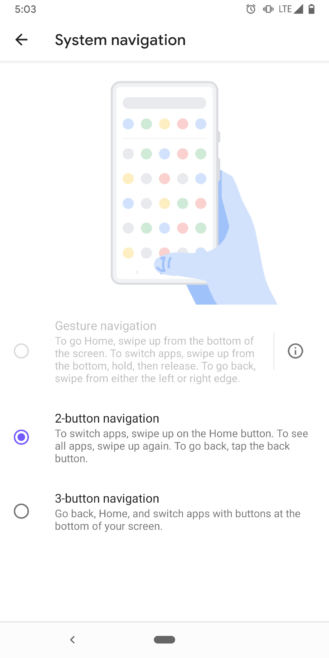 Navigation options when using a third-party launcher on Android Q Beta 5 based on a redditor's early look.

Part of this issue likely stems from the fact that Google, for whatever reason, has elected to make many of its navigation-related changes part of the launcher. The new recents/multitasking menu, for example, implemented with Android 9 Pie's two-button gesture system requires launcher support to work.

Although the newer "fully gestural navigation" (which is just "gesture navigation" as of Beta 5) has seemed to work with third-party launchers, it has also exhibited a few issues when used with them. It's possible the new gesture system, like the two-button system before it, has some components which are integrated with the system launcher, and it could take some time for Google to successfully disentangle them for integration into Android itself.

Yesterday, XDA Developers confirmed in a teardown that the SystemUI APK from a future version of Android Q is configured to disable the new gesture controls when a third-party launcher is set to default.

Noted developer Chris Lacy has been corresponding with Google on the subject of these launcher changes, and together with today's announcement, it seems like the change to three-button navigation as default for third-party launchers is just an unfortunate speed bump as Google comes up with a better solution. It sounds like Google is committed to bringing gesture support for third-party launchers into Android itself with an update to follow the general Q release.

Both Google and Lacy believe this will ultimately be a minor issue, as Lacy was told by the Android team that gesture compatibility with third-party launchers is coming later this year in a "post-launch update," according to the Android Q Beta 5 developer blog announcement. It's possible the mechanism of that update could have an impact (is it too much to hope for some Project Mainline magic?), but if one of the most well-known launcher developers isn't worried, odds are we shouldn't be.

Ting is dropping support for GSM-only phones and T-Mobile, switching to Verizon