If you ever played the original The Mighty Quest for Epic Loot on PC, you'll quickly notice a few differences in the Android version that was launched today. The first significant change is that the castle building portion of the original is absent in the mobile release, which was probably the most interesting game mode, so that's a bummer. Primarily the game now plays a lot like Nonstop Knight in the way that you hack and slash your way through each level, with the addition of egregious monetization. A forced tutorial is included (hurray for the dumbing down of games), and once you advance a bit through the adventure mode new sections will open up, such as a trial and PvP mode.

One major issues I've had with The Mighty Quest has to do with its controls. On a phone, the controls aren't all that bad since you'll play one-handed (yes, this is a portrait-only game), though once you jump to a bigger screen, like on a tablet, things go south rather quickly. The game does not support multiple inputs at the same time, which means you can't move and attack at the same time without halting one or the other when you tap on the screen. Sure, movement is built into your attacks, so your character will automatically navigate to the next opponent, but this leaves a lot to be desired if you're the sort of person that expects full control when gaming.

Besides the loss of content and the addition of iffy streamlined touch-based gameplay, you can expect to discover a bunch of different monetization options. The title's in-app purchases range all the way up to $99.99 per item, multiple currencies are also included, and yes, there's a stamina system. On top of these issues, there's also loot boxes, a 7-day gem pass, a 7-day energy pass, and an overall game pass is "coming soon." So if there was any question as to whether Ubisoft is cashing in with the re-release of The Mighty Quest for Epic Loot on mobile, here's your answer. 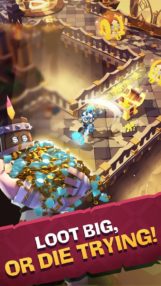 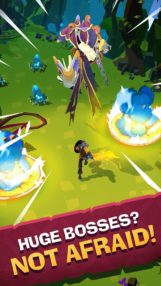 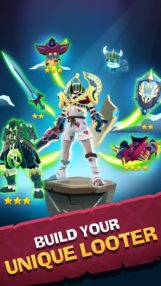 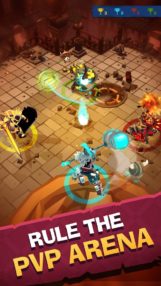 If you're really into free-to-play action RPGs built around generic worlds, I suppose The Mighty Quest for Epic Loot can be fun in short bursts. You'll have to ignore the overabundance of monetization options, as well as the lackluster touchscreen support, but at its core, the grindy hack and slash gameplay can be enjoyable as a time waster. I surely wouldn't recommend investing a lot of time or money into the title, but really I could say the same about the majority of mobile releases on the Play Store, so I guess we kind of have to take what we are given at this point. I for one, will be skipping this release.

Raid the world of Opulencia by swiping your way to victory! Crush your enemies and grab some LOOT in this fast-paced action RPG.

Paris, France - July 9, 2019 — Today, Ubisoft® announced that The Mighty Quest for Epic Loot, is now available worldwide on the App Store and Google Play. Developed by Ubisoft Paris mobile studio, the free-to-play game combines wild brawls at a frenzied pace and never-ending loot. Tap and swipe your way to victory with a single thumb in this fast-paced action-RPG that will knock your armoured socks off!

Grab your phone and enter the crazy, colourful and delirious lands of Opulencia. In this world, everything revolves around loot and bragging. Join the Mighty Quest for Epic Loot and claim the empty throne! The only things stopping you are the hordes of monsters and mad Keepers that defend the Epic Loot. So, sharpen your sword and buff your breastplate, because it is time to fight thousands of foes. Dominate everything from vicious chickens to devious wizards with your all-powerful finger.

Start your quest with the humongous single-player campaign to earn limitless wealth, powerful gear and other sweet loot. Rise to the challenge of each area as the enemy hordes grow, and the bosses become ever-more hulking. This epic tale begins with its very first Season: Royal Shadows.

On top of the main campaign, you can jump

into the PVP Arena to prove your mettle against thousands of other players in The Mighty Quest for Epic Loot’s Tournament.

There is more, you can always try your hand at a feast of ever-changing, single-player, time-limited events that come stuffed with exclusive rewards, ensuring the loot keeps flowing! But remember, the name of the game is loot! There are thousands of pieces of gear to grab. Add them to your collection then upgrade, fuse and empower them at the Forge. Equip any items alongside the skills and abilities you unlock to create a unique hero to take on this Mighty Quest.

Key features:
● Fast-paced medieval mayhem, controlled with a single thumb
● A vivid and delirious world– hundreds of unique floating castles to raid from Cursed Cathedrals to Haunted Pirate Ships, destroy all who stand in your path
● No class constraint – You are what you loot! Equip your hero with any of the thousands of pieces of loot-able gear, as well as pets, to help you loot even more
● Upgrade and enhance your hero’s swords, armours and artefacts
● Massive PVE campaign - outwit tricks and traps before battling each castle’s boss
● Take on thrilling PVP arenas, combat other players to climb the leaderboards
● Never-ending-ever-changing events stuffed full of rewards and loot
● Mmmmmmmmmm loads and loads of lovely LOOT!

Download The Mighty Quest for Epic Loot, right now, on the App Store and the Play Store.

The game will be supported and expanded with future updates, continual live operations and events.

For more information on the game, please visit the www.mightyquest.com.

Ubisoft is a leading creator, publisher and distributor of interactive entertainment and services, with a rich portfolio of world-renowned brands, including Assassin’s Creed, Just Dance, Tom Clancy’s video game series, Rayman, Far Cry and Watch Dogs. The teams throughout Ubisoft’s worldwide network of studios and business offices are committed to delivering original and memorable gaming experiences across all popular platforms, including consoles, mobile phones, tablets and PCs. For the 2017–18 fiscal year Ubisoft generated sales of €1,732 million. To learn more, please visit www.ubisoft.com.

[Update: They're back] Baldur's Gate II and Icewind Dale should return to Play Store following ...