The seemingly delayed Chrome OS 75 update finally landed two weeks ago, but last week that rollout was suspended, potentially in the wake of issues like crashes/freezes and Android apps losing internet connectivity. Today Chrome Unboxed reports that the update is rolling out again, but only for the Pixel Slate. Google's Chrome OS update dashboard confirms the Pixel Slate is currently the only device set to receive Chrome OS 75 on Stable channel. 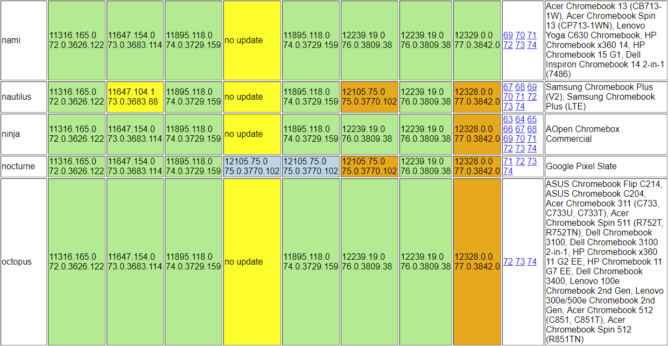 The Pixel Slate alone, at the time of writing, is set to receive Chrome OS 75.

We don't follow Chrome OS-related news quite so zealously as some, but I do personally watch the dashboard to see if/when new releases land — mostly because I'm as impatient to get Chromebook updates as I am Android updates — and this is a very unusual series of occurrences. Infrequently you might see one or a small number of devices get a bugfix update to a specific channel early, but this total halt, rollback, and subsequent single-device update is very strange.

The question now that the update is rolling out again to just one device is: Why? It could be possible that Google is rolling out a bugfix to just the Pixel Slate as it tests fixes for those earlier reported issues, but the current update's build number is identical to the initial (buggy) rollout. It's also possible that this update also delivers some other critical fix the Pixel Slate just can't go without, bugs or not. All we really have to go on is speculation.

Whatever the reason, the Pixel Slate gets to live just a bit further into the future than other Chromebooks right now. In the meantime, the rest of us have to wait for Google to continue the wider rollout of Chrome OS 75, which could happen at any time.

There are still a few stragglers, but now a new build of Chrome OS 75 (75.0.3770.129) is rolling out to almost all devices, including those that saw the previous update.

If you previously updated to Chrome OS 75, you might want to move to this new version soon. Official explanations for why the previous update was halted are lacking, but it's possible you could run into issues using the older version.