If you use an app that relies heavily on frequent scans from your device's Wi-Fi radios, you've probably felt the squeeze of a behavior introduced with Android 9 Pie which limits the number of times an app can perform scans. Developers have been complaining to Google about this since last year, but the company has since decided that the behavior will remain as is.

Developers have been chiming in on the Google Issue Tracker across multiple threads from May of last year (we've found two of these comment chains). They publish apps that need to perform Wi-Fi scans every few seconds in order to perform their intended tasks — the tasks include indoor navigation, network access point inspections, signal strength measurements, and other objectives. However, with Pie, the devs have since found that their app's scans return errors after a certain number of scans within a period.

Google responded in late July, saying that it had installed limits as to how many times an app can scan for Wi-Fi to improve network performance and battery life. Unless it is a system app, a foreground app is capped at four scans every 2 minutes while a background app is only allowed a single scan every half-hour.

Developers believe that because their users downloaded their app knowing the power-intensive nature of what it needs to do to achieve its intended outcomes, those users should at least be offered an opt-in toggle somewhere.

Complaints piled up against the Wi-Fi scan throttler for months before the company finally decided this past Friday that it would not fix an intended behavior. It did offer an olive branch of sorts, pointing to a developer option in the Android Q Beta that would allow rooted devices to turn off the throttler, though some have argued that apps for the end user are still rendered pointless.

The beat goes on, though, as messages of disappointment and disbelief continue to flow in on these threads. The debacle has placed people with mission-critical tasks to either consider moving down to an Android Oreo device or shuffle off to iOS. We sense that the story isn't quite over yet, though, so we'll keep an ear to the floor.

A Googler just posted a comment on the Issue Tracker post saying that a toggle to disable Wi-Fi scan throttling will be added to Android. It'll show up on Q Beta 5 first (which is scheduled for Q3) and be available from then onwards. Unfortunately, that means things aren't ever going to be fixed on Pie, but when Q is officially released, users will be able to disable Wi-Fi scan throttling.

As expected, Android Q Beta 5 includes a switch in the Developer Options for disabling the throttling. Now you just have to wait for your device to get Android Q! 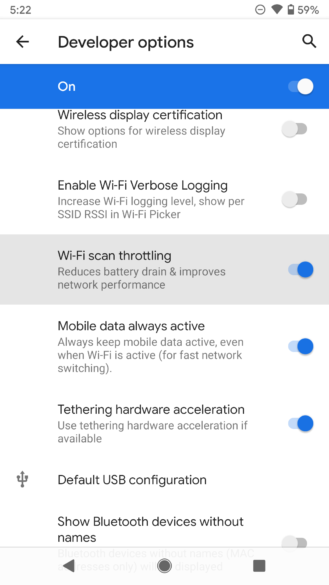 Ting is dropping support for GSM-only phones and T-Mobile, switching to Verizon