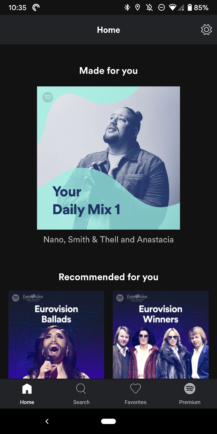 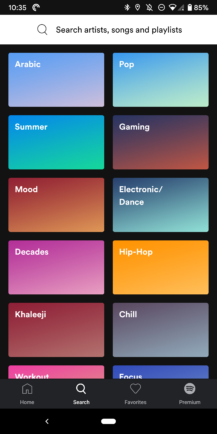 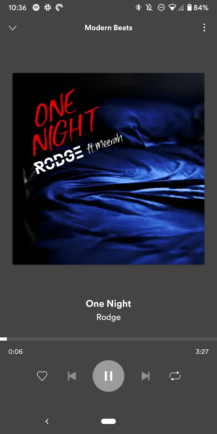 The app is designed to work smoothly on slower connections and older devices, and therefore uses a limited amount of resources. As such, it lets you set a data usage limit, and will warn you when you're about to reach it. Similarly, you have the option to control the local storage cache to avoid using up too much space on your phone. The app is also compatible with all phones running Android 4.3, which ensures it can be used by people who haven't had the opportunity to upgrade their handset in a while. 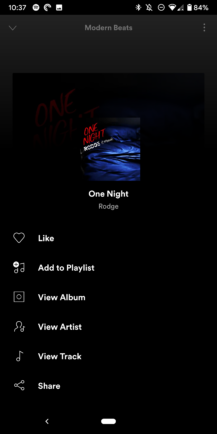 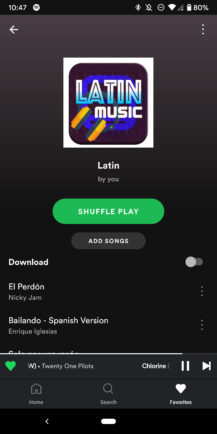 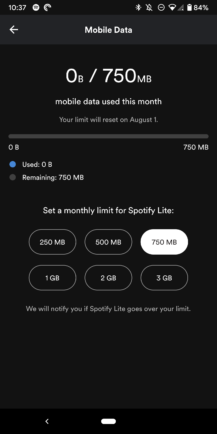 Unlike the first release, this version lets you search for and play any song you want if you have a Premium account, just like with the main app. If you're a Free user, you can still access your playlists and browse public ones. Most importantly, you can save songs to your lists and download them locally to play then offline, which wasn't available in the beta version.

Despite most features being very similar to the main app, there are some limitations with the Lite version. For starters, it doesn't integrate Spotify Connect, which means you won't be able to play your music on other devices or speakers. Search and sort features are also missing in both your library and different playlists, so you'll have to use the search tab instead. Speaking of playlists, these aren't organized by folders in the Lite app and will show up all together in a what looks like a random order. The artist page is also stripped out of most contextual information, such as their rank and biography. Finally, Behind the Lyrics and Podcasts are gone from this version, as they may use too much data. Nevertheless, the app remains very usable and is a great alternative if you lack a reliable and fast connection or are low on space.

The app has already been downloaded more than a million times on the Play Store, and the company is leveraging that popularity to officially expand it to more markets. You can give it a try using the link below, but you'll only be able to get it if you live in Brazil, Canada, Mexico, Argentina, Peru, Chile, Colombia, Bolivia, Costa Rica, Dominican Republic, Ecuador, El Salvador, Guatemala, Honduras, Nicaragua, Panama, Paraguay, Uruguay, Saudi Arabia, Egypt, Algeria, Lebanon, Morocco, Tunisia, Oman, Jordan, Bahrain, United Arab Emirates, Kuwait, Qatar, South Africa, Indonesia, Philippines, Vietnam, Malaysia, or India.

Music is meant to be enjoyed by everyone, regardless of your network connectivity, data plan, and whether or not you have the latest phone. That’s why today, we’re officially introducing Spotify Lite. Lite is a small, fast, and simplified version of our unparalleled music experience that works much like the main Spotify app. You’ll still be able to search and play your favorite songs and artists, save them, share with others, discover new music, and enjoy playlists made just for you, but with a few extra features making it ideal for older devices and operating systems.

“Spotify Lite was built from the ground up based on user feedback from around the world, allowing millions more to enjoy the world’s best music experience — especially in areas with limited bandwidth and phone storage,” says Kalle Persson, Senior Product Manager at Spotify. Lite can be downloaded separately, both for Free and Spotify Premium users, and used either alongside or independently from the main Spotify app on all Android phones running version 4.3 or higher.

With Spotify Lite, you can easily control your data and storage. It’s only 10 MB, so it’s quick to install and load while offering the same great listening experience that lets you discover, play, and enjoy millions of songs. Spotify Lite also comes with the ability to set a data limit and get a notification when you reach it. This way, you’ll be able to focus on finding your next favorite song—not worrying about data.

No need to worry if you’re running low on storage—Spotify Lite also allows you to control your cache, and clear it with a single tap.

Spotify Lite is now available in 36 markets* across Asia, Latin America, Middle East and Africa on Google Play with more markets and features to follow as we continue to improve the Spotify Lite experience.