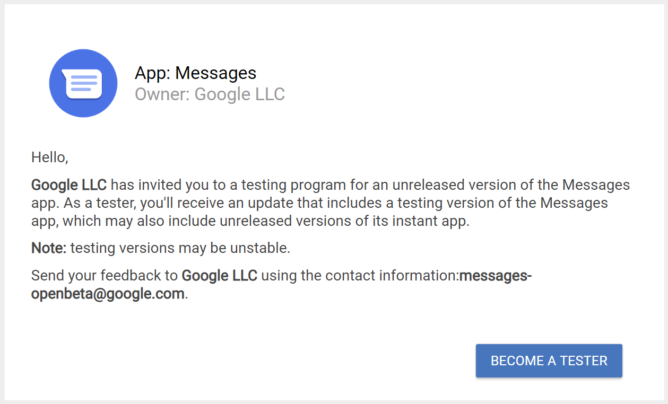 To join, you'll need to navigate to this page and click the big obvious blue button to become a tester. History being any indicator, versions of apps distributed by Google in the testing program can have pretty major bugs, so don't opt in if the reliability of the Messages app is a firm requirement.

Android Police's Toolbox for Google Play Store extension makes opting in or out of testing programs easier if you need it.

Should you decide to leave the program, you can opt out later by visiting that same link again. You can also see beta program availability/the link to leave directly on the Play Store via Android Police's own Toolbox for Google Play Store Chrome extension, also available for Firefox.

The formal announcement of the new open beta testing program comes via a post by a Google employee to the Messages help community, together with a formal request that participants not "publicize or share the features you’re testing until they’re publicly available" — like anyone is going to adhere to that. A help page regarding the program with details for opting in, out, and how to send feedback regarding the app was also created.

A the time of writing, the open beta program doesn't seem to be distributing a new version of the app just yet on any of the devices I've checked, but that could change.

26 temporarily free and 27 on-sale apps and games to kick off the week, including Stardew Valley