Microsoft's been toying with the idea of mirroring your phone's notifications (and more) to Windows 10 for quite a while. The feature was previously present for beta-testing folks running the so-called "insider" builds, and yesterday the company formally announced that notification mirroring has arrived for the rest of us — though reports indicate that the rollout is happening gradually.

Notifications have arrived! With the Your Phone app, you can now receive and manage your Android phone’s notifications on your PC. Get Your Phone app from the Microsoft Store here: https://t.co/E56Z8eVdIR pic.twitter.com/ovlKi1QOJy

There wasn't much fanfare when it came to the announcement, which happened over Twitter. Microsoft's director of program management for Microsoft Mobile and X-Device Experiences (chonk of a title) confirmed that the feature is now rolling out broadly. Microsoft senior program manager Analy Otero Diaz later responded to comments reporting issues with the new feature, stating that the rollout was happening gradually, and "it may take a few days to show up for everyone." It generally worked for me in my testing, though there were limitations when it came to notification content, and it would randomly stop pulling notifications or showing the section in the Your Phone Windows 10 app. You also can't seemingly link your phone with more than one computer (or, at least I couldn't when I tried), which seems like a bit of an oversight.

The setup process is trivially simple, though you will need to grant a whole pile of permissions and the Your Phone Companion Android app has an annoying persistent notification to keep itself running. Once setup is complete, you'll also have to separately manually grant the app notification access. You can also use the desktop app to copy photos off your Android device remotely or view and send SMS messages in a threaded conversation view. 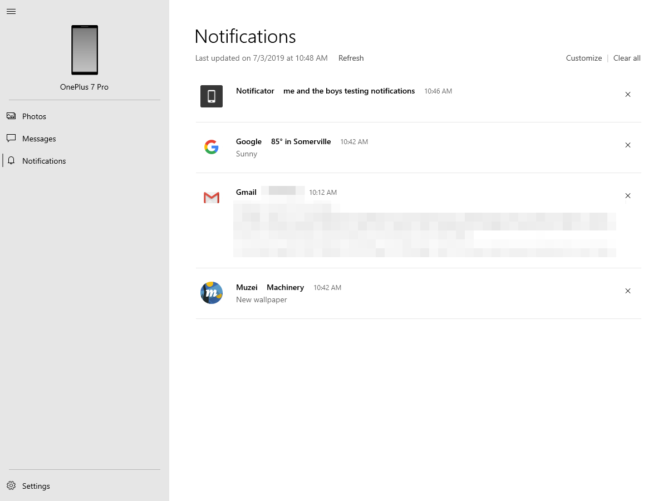 If you're interested in checking it out, make sure you've installed the Your Phone app on your Windows 10-powered PC (though it should be pre-installed if you're running the latest update), and linked it to your Android device with the Your Phone Companion app.

[Update: Assistant hits more countries] Sonos will roll out Google Assistant to the One and ...