If your home needs a huge plot of space filled up with... something, why not chuck a big television in there? TCL makes a few good sets and it has a 75" 4K model it'd like to sell you on discount. Instead of paying four digits for this Roku-embedded TV, why not pay just $800 for it?

Simply put, you're looking at a TV made in 2019 that has more software than your last TV probably did. There's HDR enhanced by advanced LED backlighting control, Dolby Vision support, and Roku TV inside with thousands of channels available and no over-the-top box required. But if you need to plug things in, there are three HDMI 2.0 ports, one USB port, headphone jack, optical audio out, and an Ethernet port — because, of course, Roku needs an internet connection, though you can use Wi-Fi. You can also use a remote, your phone, Amazon Alexa, or Google Assistant to control the TV from far away and at weird off-angles of up to 178° horizontal and vertical. 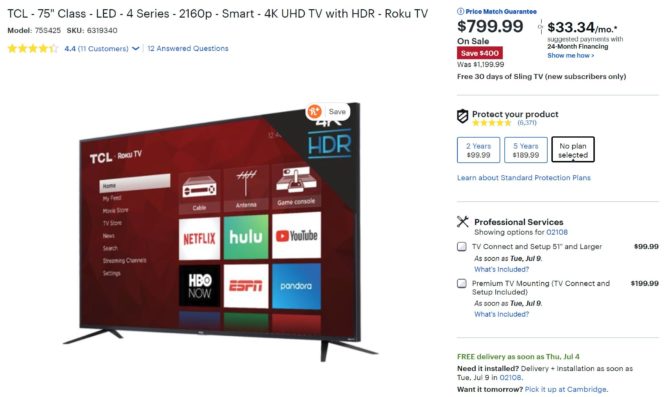 What's officially known as the TCL 75S425 is available at a number of retailers for the past few months with an MSRP of $1,600, then a lower list price of about $1,200. When Amazon got on board, it brought the level down to $1,000. Now, all the big outlets have come, presumably at the manufacturer's urging, to $800.

We don't have an idea on how long this deal with last — as of publication, Amazon seems to have run out of stock — but it's a holiday week, so hopefully you'll have some time to ponder this one over.

[Update: Out now] LEGO Tower is a new business sim from NimbleBit, open for pre-registration on ...

The LG G8S ThinQ is rolling out globally