Google chose RCS as the next holy grail of messaging after it shut down Allo and abandoned Hangouts. However, since the Rich Communication Services depend on the mercy of carriers and their specific device support, rollout has been exorbitantly slow, which even lead Google to take the reins and push out RCS in France and the UK using the Messages app (with more markets to follow). In the US, though, that's not the case so far. But perhaps Google calling the carriers' bluff is working, as Simple Mobile, Visible, and Xfinity Mobile are starting to support the new protocol.

Digital carrier Visible has apparently had RCS for a couple of weeks already for the Pixel 3, just like its parent Verizon. When our Pixel-wielding tipster switched to the service, they received the RCS toast in the Messages app right away, but when we checked out subreddit r/visible, it became clear that some customers on the network had been enjoying the new messaging experience for a while already. Maybe that's another incentive for some people to switch, as Visible has removed its 5 Mb/s data cap for a limited time right now. Keep in mind that since Visible works on Verizon's network, only the Pixel 3 and the Samsung Galaxy S9/S9+ should be supported.

With Simple Mobile, the case isn't as clear cut: our tipster updated Google Messages to the latest version 4.6 when the app notified him that chat features are now enabled. Still, Google's own RCS rollout hasn't reached the US yet, so it's safe to assume that Simple is supporting Rich Communications itself — especially since an employee teased RCS a couple of weeks ago. Here, only Samsung devices should be able to use the messaging standard, as per T-Mobile's implementation; although it's odd that our tipster could activate RCS on Google's Messages app, not Samsung's.

At the moment, support for RCS seems to be janky at MVNOs in general, as customers report that chat features are switching on and off randomly, with one Xfinity Mobile subscriber even saying it was briefly live on his Note 8 — which is not officially supported by Xfinity's network provider Verizon. Thus, all the newly activated phones might be part of some test or fluke within the internal communication between carriers and MVNOs.

Hopefully, more MVNOs will jump on the bandwagon and properly activate RCS for their customers. After all, the US is one of the few markets in the world where text messaging is still a major communication platform, so improvements to the ancient standard are more than welcome. If you're on one of the mentioned MVNOs yourself, it might be worth downloading Google Messages (APK Mirror) and seeing if you can use RCS features regardless of which phone you have — maybe device restrictions have been relaxed.

As always, RCS rollout turns out to be messy. We've received a statement from Visible saying that it currently doesn't offer RCS on its network, contradicting the reports we've received. Meanwhile, yet another Visible customer and one of our staff members said that they have RCS enabled on their Pixel 3XL and 3 respectively, so there's that. Maybe Google is rolling out its own RCS hub either purposely or accidentally, although it's still odd that the service is only available on Pixel 3 phones. 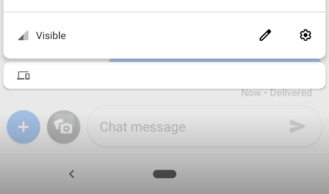 [Update: New multiplayer trailer] Dr. Mario World is up for pre-registration on the Play Store