Google's move from Play Music to YouTube Music is still unresolved — especially since the final transition of libraries and uploaded content between the two still hasn't happened — but the latter is picking up a new feature to help with offline playback. "Smart Downloads," as it's called, will pull down up to 500 songs that you've "liked" via that button, intelligently selecting and downloading them over Wi-Fi for later enjoyment.

The new Smart Downloads builds upon the popular Offline Mixtape feature, and it doesn't seem to be live just yet, though 9to5Google spotted it in a teardown all the way back in January, and there's some indication that it was in limited testing later. Precise details also don't seem to have been formally announced, with only The Verge and Engadget reporting on this.

Smart Downloads offers some configuration options (like limits for the volume of music to pull down and store) should space be a concern, and downloads are set to only happen at night. However, it isn't immediately clear how this feature will look or work when it is live.

Google gave The Verge a description, naming a list that included "Offline Mixtape, Pop Hotlist, Summer 2019 playlist, Kacey Musgraves album," as an example. It sounds like Smart Downloads won't exactly be a playlist, per se, but just a feature that assembles other content to be stored in its own organizational format. It will include the Offline Mixtape, as well as "songs from your Liked Songs playlist and your other favorite playlists and albums."

Again, you'll need to be a YouTube Music Premium subscriber (or have one of the older, bundled, grandfathered YouTube/Play Music plans) to get this new feature, so keep that in mind. It isn't clear when this feature is rolling out, but given the announcements, it should be soon.

Check your YouTube Music app—the promised auto-downloading feature may already be live. Readers have let us know that Google is rolling out Smart Downloads to the app, which you can see below. 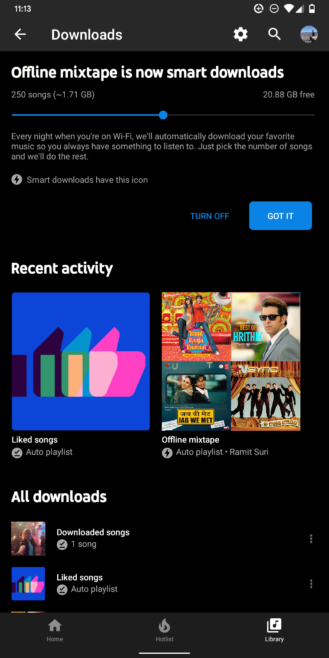 The offline mixtape appears in your downloads menu with a bar allowing you to adjust how many songs will download. Again, you need a premium subscription for this feature, and auto-downloads only happen at night when you're on WiFi.

ActionDash 3.0 beats Google's Digital Wellbeing to adding a 'focus mode,' plus other improvements