Prime Day 2019 is nearly upon us, but ahead of the main event, Amazon has been known to trickle out deals early here and there. Such is the case with this Prime-exclusive sale on the Fire TV Recast: the OTA DVR, normally $229.99, is currently $100 off for members.

The Recast is a pretty unique device. You plug a TV antenna into it, and it grabs over-the-air broadcasts, which it can either play live on another Fire TV device in your home or record onto a built-in hard drive for later viewing. The base model, having two tuners, can either record two shows at once or play one show and record another. It's got 500 gigs of storage, which can hold about 75 hours of video. That can add up to a lot of free content available on demand. The upgraded model is $100 off, too, at $179.99. It's got twice as much storage and twice as many tuners. 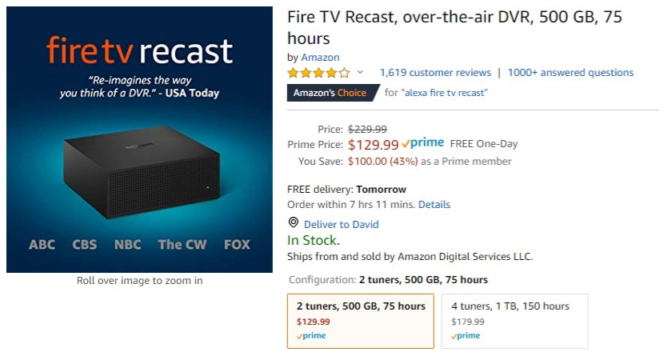 Again, the Recast itself can't play video. You'll need another Fire TV on the same network for playback. Still, it's a convenient and cheap way to consume network TV, and that it doesn't have to be near your set makes it easier to position an internal antenna where there's better reception. If you're already watching TV with an antenna, this guy could probably slot into your setup pretty seamlessly. Head over to Amazon to pick one up.

Monday deals: Get Eufy's new smart doorbell on the cheap, plus Wi-Fi light switches and ...