Plenty of details about Samsung's upcoming Note10 have already leaked, but some of the particulars have changed over time, and another tweak has just been spotted. In what looks like the first set of real-life photos for the upcoming device, it seems that Galaxy Note "Pro" name may not pan out. The presumably bigger phone in the upcoming pair will go by the name "Note10+," and you can get a glimpse of the hardware that goes with it just below. 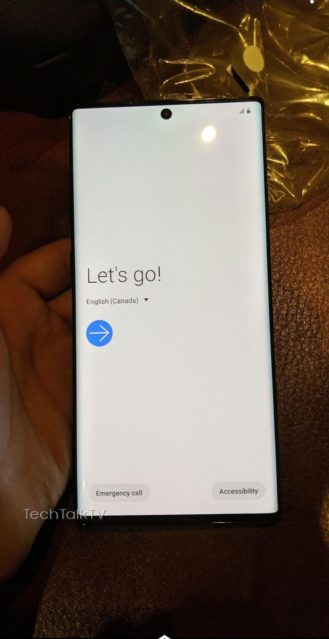 Front of the Note10+, presumably in the initial setup screen.

In general, these photos match the previous renders, showing a camera cutout that has been relocated to the center of the top edge, rather than in the corner as on the Galaxy S 10/S 10+. The number of front-facing cameras on the bigger model seems to have been trimmed down from two on the S10+ to just one on the Note 10+. Lighting in the photos isn't ideal, but the boxier shape of the Note 10 also appears to be confirmed, though the corners of both the phone and its display are slightly rounded. The left and right edges of the display still feature Samsung's recently characteristic curve. 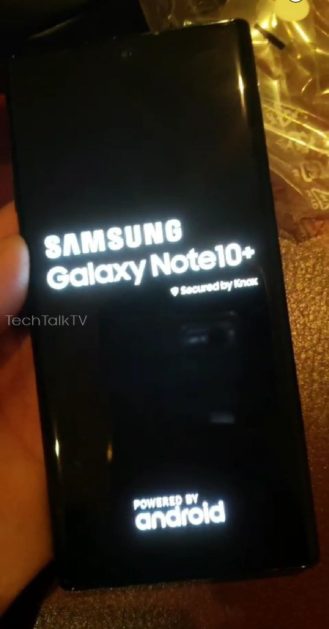 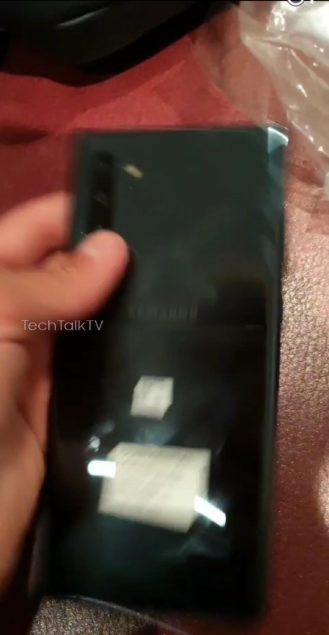 The back of the phone is a bit harder to examine, given the blurry nature of the photo, but at least three cameras in a vertical configuration are visible in the corner. Interestingly, the two extra cutouts below the rear camera flash that were in the earlier renders — one of which was speculated to be a time of flight sensor — aren't visible here. Whether that's a result of the image quality or something else remains to be seen.

The photos come courtesy of @MrTechTalkTV, and though they may have been taken by the proverbial and anachronistic Mr. Blurrycam, they're the first we've seen of the front, back, and boot screen of Samsung's next Note. If previous rumors of an August 7th Unpacked event hold true, we'll likely hear and see more soon. In the meantime, you can check out more details in our rumor/leak roundup here.