We're just over a month away from finding out what the Galaxy Note 10 will bring us, but if you do want a phablet with a stylus right heckin' now, the Note 9 is currently at its most affordable price since it began selling. In fact, you can get a 512GB unit for the same price as a 128GB version for the next couple of days.

The Note 9 started out life last August as a $1,000 phone and has kept that label for most of the time since. It's got a 6.4" Super AMOLED display for that S Pen to play around in, a Snapdragon 845 with 8GB of RAM, a 4,000mAh battery, dual rear cameras, and IP68 elemental resistance. Oh, and it also has a microSD card slot, because you obviously need to chuck in a huge addition to those 512GB of storage space already. 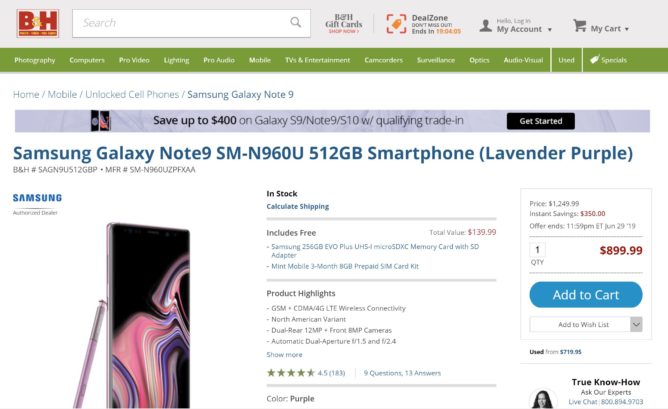 And that's where things get interesting: the price of a 512GB Galaxy Note 9 has been floating north of $1,100 for most months on Amazon and has struggled to keep below $1,050 before popping right back up. Most recently, it has been swimming in the $1,120 zone and had spiked to $1,150 just before this drop.

Both Amazon and B&H have locked the price down to $900 — the same going price for a 128GB Note 9 direct from Samsung right now — though B&H is also chucking in a complimentary 3 months of Mint Mobile's 8GB plan plus a Samsung 256GB microSD card.

This price applies to all available colors and is expected to be valid until 8:59p.m. PDT on June 29.