The current Firefox for Android browser is feature-packed, with tons of security features and support for extensions, but it has never quite matched the performance that Chrome offers. Mozilla has spent the past few months working on a brand new browser for mobile, nicknamed 'Fenix,' and now it has entered public beta.

The new Firefox for Android has already been publicly available for a few months, under the name 'Firefox Preview.' Mozilla says the browser is up to twice as fast as the current Firefox for Android, and it offers protection against tracking scripts by default. The interface has been completely revamped, with a bottom address bar and a 'Collections' feature for organizing sites. And yes, it has a dark mode. 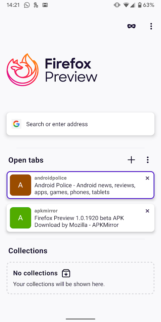 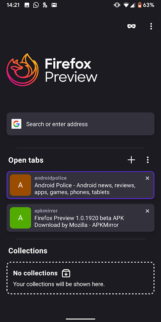 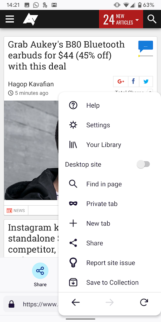 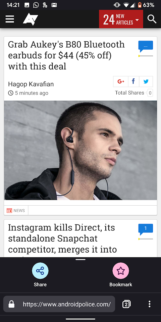 Under the hood, the new version uses GeckoView, a modified version of Firefox's desktop rendering engine designed to be easily embedded (similar to how Android apps can use embedded instances of Chrome). The company said, "Building Firefox for Android on GeckoView also results in greater flexibility in terms of the types of privacy and security features we can offer our mobile users. With GeckoView we have the ability to develop faster, more secure and more user friendly browsers that deliver unprecedented performance." Extension support is not yet present, but the developers told us that it is being worked on.

Mozilla hopes to replace the current version of Firefox with the new browser sometime this fall. As we covered previously, the current Firefox for Android will enter maintenance mode next month and won't receive any new features. Development of Firefox Focus is also being put on hold.

You can try out Firefox Preview from the link below.