The summer solstice was several days ago, which means that school's out and summer vacation's in. If you've been looking for some way to distract your kids while they're home for three months, a cheap tablet is a good way to do so. Amazon is currently offering a three-pack of its Kindle Fire 7 tablets for $109.97, or just about $36 apiece.

With a 1.5GHz processor and 1GB of RAM, the Fire 7 is no powerhouse. But for ~$36 a pop, you can't really complain. I'm not sure there's a cheaper way to keep your children consistently occupied. Plus, they won't constantly be begging for your phone to play games on anymore. 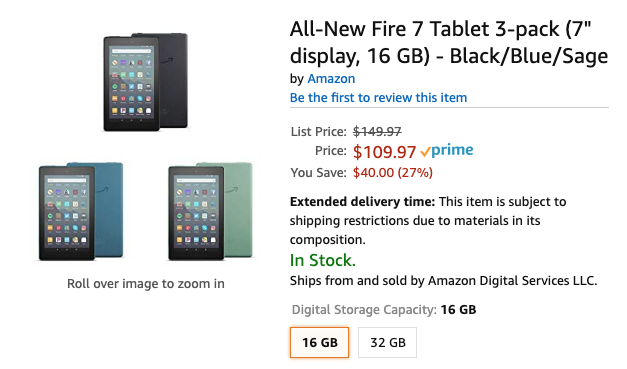 Amazon is offering a three-pack of the 16GB models (don't worry, they have microSD slots) for $109.97. There are three color assortments to choose from: black/blue/sage, black/sage/plum, and blue/plum/sage. If you'd prefer a bit more storage, the 32GB three-pack is $169.97, or around $56 each. But given how cheap microSD cards are these days, it's a much better idea to just buy some external storage. Medieval cemetery management sim Graveyard Keeper is out on Android