The ~$300 active noise-cancelling Bluetooth headphone market is heating up. Bose was arguably the pioneer of the segment, but many other audio companies have since thrown their hats into the ring. One of the latest entrants is Audio-Technica, a company with plenty of reputation to uphold.

Having spent several weeks with the ATH-ANC900BT, I've found that it's deserving of the Audio-Technica logos on it in terms of sound quality, but it falls short in other arenas. It reminds me a lot of the Bose QuietComfort 35 II in many ways, both good and bad. Ultimately, I don't think it's worth the $299 asking price given all of the issues.

Looks are always subjective, but I think most will agree that the ATH-ANC900BT is a handsome set of headphones. The simplistic design works well, and I'm a fan of the subtle Audio-Technica logos on each ear cup. However, while it looks nice, I'm not really happy with the materials. Like the Bose QC35 II, the construction is basically all hard black plastic. I would have much preferred a soft-touch material like Sony uses on the 1000XM3, which makes the headphones feel more premium when being handled. But given that headphones are on your head most of the time, it's not a huge deal. 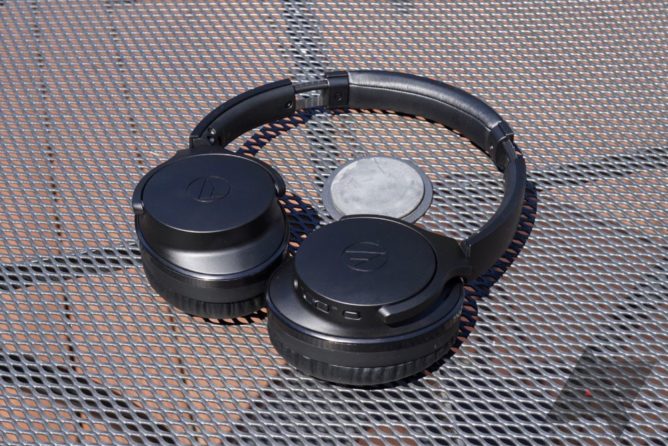 The ATH-ANC900BT weighs in at 263g, making it heavier than both its Bose (234g) and Sony (254g) competition. I didn't notice the extra weight before looking the numbers up, so it's not something you'll actually feel. In terms of comfort, I think most will be satisfied. As someone with a big head, I still find the 1000XM3 the cushiest of the three, but the Audio-Technicas aren't bad by any means. The fit reminds me of the QC35 II's, but the ATH-ANC900BT doesn't squeeze my head as much. There's still a bit of pressure, but it's not excessive. Unfortunately, I don't think these are on display at stores like Best Buy, so the only way to know if you'll like the fitment is to buy them. 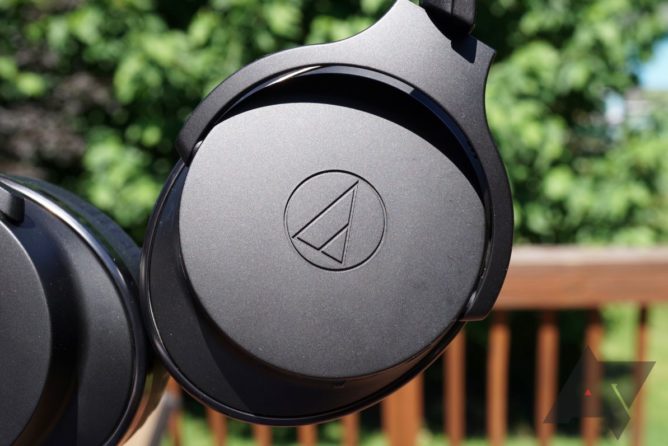 Like the 1000XM3, the ATH-ANC900BT uses touch controls, but they're not nearly as well-executed as Sony's. For one, the touchpad is on the left ear cup, which most right-handed people will probably find rather unintuitive. The controls themselves seem straightforward on paper, but they don't work that well in use. Here's a quick rundown:

Makes sense, right? In practice, though, these controls fall flat on their face. Distinguishing between the top/middle/lower third of the ear cup is really hard, even after using the headphones for several hours. Plus, I'd often have to tap on the same area a few times for it to even register. I also found it impossible to swipe up to play the next song without ramming my finger into the sharp plastic piece that the ear cup swivels from. I tried making my swipes shorter, but then they didn't register. Audio-Technica really should have stuck with physical controls. 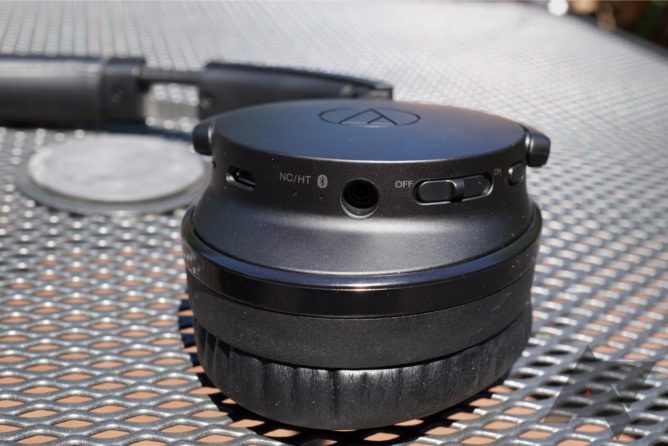 On the left ear cup, you have the aforementioned poor touch controls, as well as an on/off slider, a 3.5mm output, a Micro-USB charging port (I know, I know), and a "subswitch button" that turns the hear-through function on and off. The right ear cup has nothing on it. 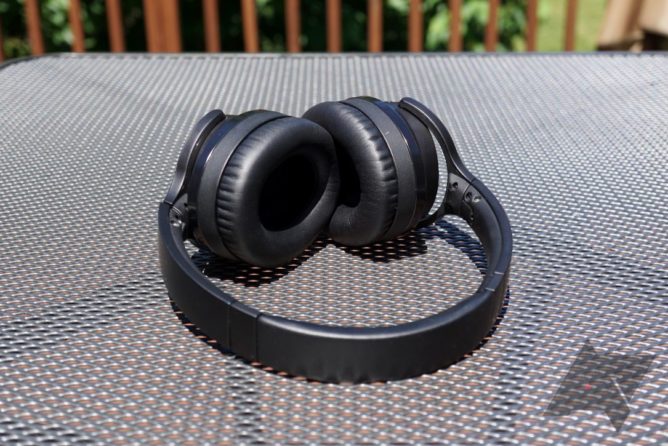 Battery life is rated at 35 hours with ANC on, or 60 with it off. For reference, the QC35 II and 1000XM3 are rated at 20 and 35 hours with ANC on, respectively. Bose doesn't cite a rating with ANC off for its QC35 II, but Audio-Technica's 60-hour claim is a lot higher than Sony's 38-hour one. I cannot verify either figure due to differences in listening behavior and the sheer amount of hours they last, but you won't ever have to worry about the ATH-ANC900BT dying on even the longest plane ride so long as they're fully recharged beforehand. Unfortunately, charging is done via Micro-USB; I truly don't understand why a $300 set of headphones in 2019 still uses such an old port, but it is what it is. 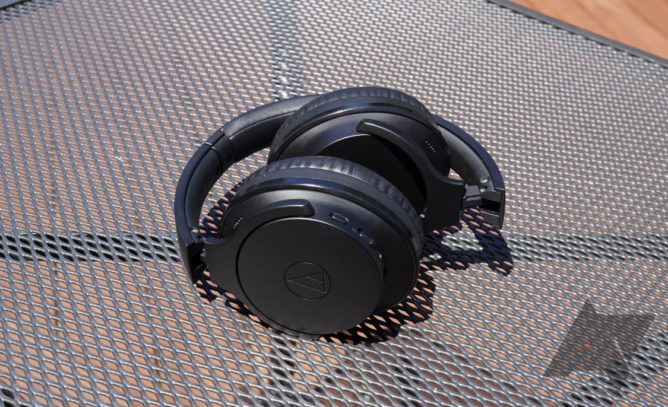 In the box, you'll find a hardshell carrying case, a charging cable, a cable for wired playback, and an airplane adapter. The headphones themselves are foldable as well. A one-year warranty is included.

Audio quality is probably the strongest suit of the ATH-ANC900BT, and it's at least partially thanks to the Bluetooth 5 support. I thought the 1000XM3 had clear sound, but even that's a bit muffled when compared with the Audio-Technicas. In other words, it's extremely clear across the board in the lows, mids, and highs. It reminds me somewhat of the QC35 II in this regard, though the ATH-ANC900BT offers better clarity. Fans of balanced sound and not-so-boosted bass will definitely enjoy this. Call quality is good, and people on the other line were able to hear me clearly. 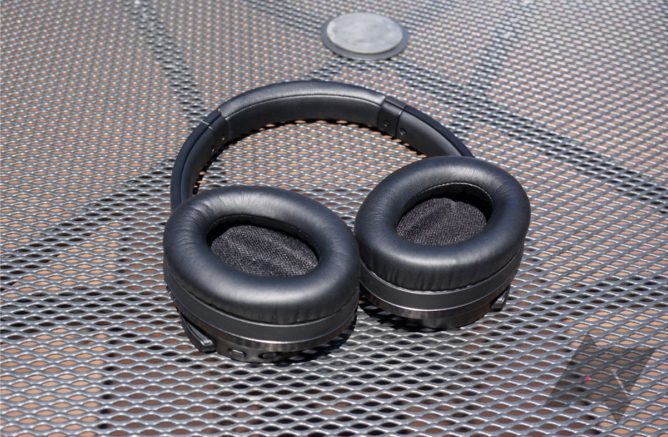 However, a major pitfall of these cans is the lack of a tunable EQ. While I'm sure there are plenty who will like these headphones' sound as is, there are probably many more wishing for a bit more bass. Audio-Technica just didn't build enough adjustment in, and that's also reflected in other aspects, like noise-cancelling.

Speaking of the ANC, it's decent. I'd say it's about on par with the QC35 II's, but it still falls behind the 1000XM3's in both tunability and actual performance. Don't get me wrong — it's not bad at all, just not as good as the segment leader in this regard. In the companion app, there are only three options for this: Airplane, On The Go, and Office/Study. I didn't get a chance to try these out while 35,000 feet in the air, so I can't comment on performance in that regard, but On The Go and Office/Study seemed to work well on land in cancelling background noise and chatter out.

In terms of customization, there are three listening modes. The aforementioned Noise-Cancelling is one of them, and the second is an off button. The last is Hear-Through, which, as the name suggests, lets you tune how easily you can hear your environment while listening. There are three adjustments: low, medium, and high. There's not much really to say about them other than they work fine.

The app only has a handful of other adjustments. One is for audio codecs, for which there are four options: aptX, AAC, SBC, and auto. I left it in auto for testing purposes. There's also a toggle for "Voice Prompt," though I'm really not sure exactly what it controls. The "Hey Google" Assistant keyword seemed to work regardless of whether it was on or off. The only other "feature" is something called "Product Locator," which doesn't seem to work properly and causes a persistent notification to show up.

Probably not. If all you're looking for in a set of noise-cancelling headphones is balanced sound and long battery life, the ATH-ANC900BT is a decent choice. Noise-cancelling and comfort are alright as well. However, headphones have to be good in many more ways, and this pair of cans comes up short in many major regards, namely playback controls. If Audio-Technica had just stuck with traditional physical controls, these might honestly be deserving of a recommendation, but alas. Sound/ANC customization is also missing, and the fact that it doesn't have USB Type-C will make it a non-starter for many of you. 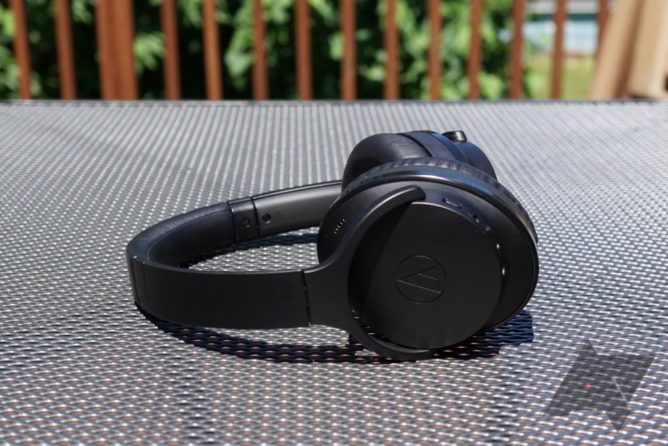 The ATH-ANC900BT's $299 MSRP makes it $50 cheaper than the Sony 1000XM3 and the Bose QC35 II, but both of those can be found discounted frequently. Plus, our own David really liked the Jabra Elite 85h, which also carries a ~$300 MSRP (and is already discounted to $250). In this extremely competitive segment, Audio-Technica's first attempt just isn't good enough to distinguish it from the rest.