Charging isn't just something you have to do at home, that's why they make portable chargers/battery packs and super-small wall warts. But sometimes, you can't be sure where you'll get your power — not just in terms of which coffee shop or hotel you'll plug in at, but which country. If you travel a lot for work, you're used to the added complexity that travel adapters impose, but with a compact design thanks to gallium nitride, one 30W USB-C port, and three USB-A ports, Zendure's Passport Go might save some space in your rollaboard. It's a decent value at $39 right now, but it's set to get more expensive later. Zendure's Passport Go, like the SuperTank, isn't winning any awards for looks. Beauty might be in the eye of the beholder, but the Passport Go's "ribbed for your outlet's pleasure" thing doesn't quite work for me. It's around the same size or a little smaller than most USB-equipped travel adapters like this, though most don't come with four USB ports and 30W of PD output over Type-C. 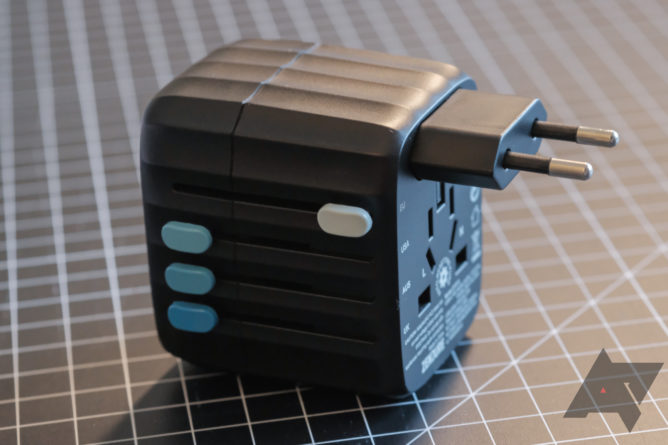 Four sliding mechanisms, triggered by thumb slides on the side, provide prongs for the four possible plug types: EU, USA, Australia, and the UK, ostensibly offering compatibility with the outlets used in over 200 countries. As with almost every one of these travel chargers, there's a bit of wobble to the longer plugs, like the EU one, once they're extended — it's unavoidable in a telescoping design. 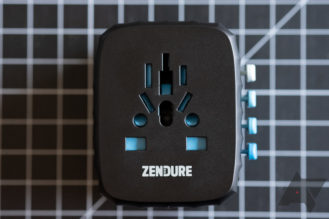 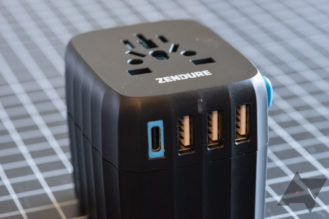 USB ports are all on the bottom front edge, with the lone USB Type-C to the left, and the three USB-A ports to the right. A multi-compatible AC outlet is on the flat face above them. My eyes can pick out the slots for the US, UK, Australia, and the various EU variants.

The unit we reviewed was an early sample, so we didn't get all the accouterments, but we're told that the final version will include a pouch, user manual, warranty card, and sticker.

We measured the Passport Go to reach 152F at its single hottest spot (right around the ports on the bottom) after an hour outputting 30W. When output dropped, that temperature fell quickly, and the affected area was so small, I don't think the observed temperature will be an inconvenience.

Graph of voltage vs. current at 20V and 10mA steps, 1 second per step.

Voltage measured on our graphs was pretty rough for a wired power supply, though it's still within spec. Batteries can have some rough inconsistencies in voltage, but we usually see smoother results from wired chargers. That could result in some odd behavior in certain circumstances or with certain devices, but we didn't observe any.

We measured inconsistent so-called "vampire" draw, between 1.4 and 0.1W, when devices were plugged in but not requesting power. With no USB devices connected, it consumed no power. 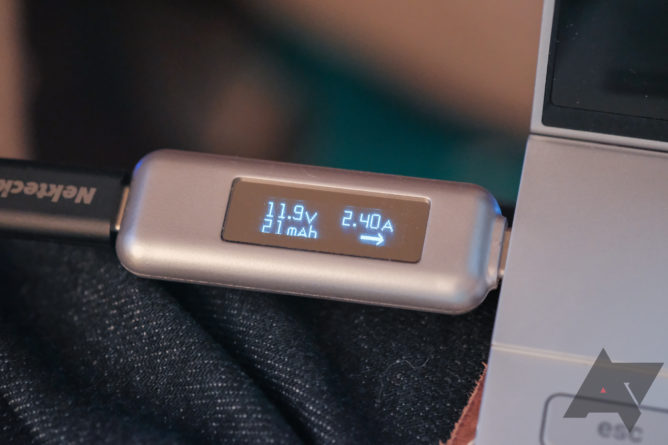 It also passes our entirely non-scientific Pixelbook test, happily spitting power to the super-picky Chromebook with no noticeable issues. That's usually a good indicator of performance, though it's purely anecdotal. It also worked with every phone tested, and a 2017 MacBook Pro (though not fast enough to charge it very quickly, in the last case).

We even managed to test it internationally, and it didn't exhibit any strange behavior so far as we could tell. Do note, though that this doesn't do voltage conversion.

At the early Kickstarter prices, I'd say yes, this is worth buying if you travel internationally a lot. $39 for a higher-quality travel adapter with a built-in USB charger is a pretty good price by itself, and this has a USB Type-C port that does Power Delivery at up to 30W. If you live as far in the future as I do, the USB Type-A ports won't see much use, but they'll still be handy for topping up stuff like older cameras or noise-canceling headphones when you're on a trip. 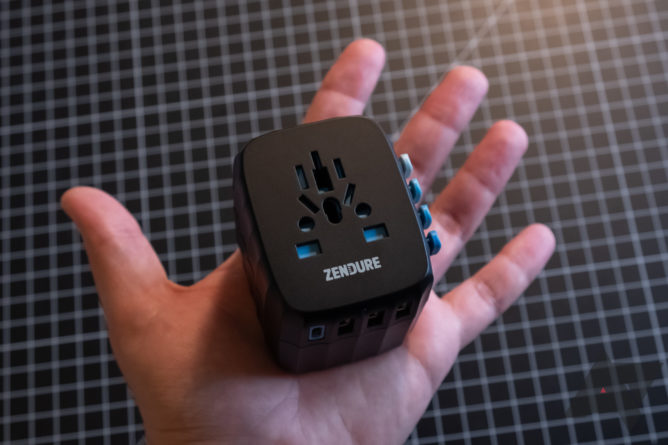 At the expected retail price of $59, though, my opinion changes to a no — at least for me. Cheaper international travel adapters with built-in chargers run under $20 for four USB Type-A outlets, and I don't think the benefits of 30W of Type-C, PD-compatible charging are worth the premium.

One could easily just buy a one-port travel adapter or a super-cheap Amazon special multi-adapter and get Anker's Atom PD 1 instead for around the same price, and get the advantage of a tiny portable charger to use in the US, too. It would be a larger and more complicated setup, but for the same price it has more utility, and I just can't see rationalizing $59 for the few perks the Passport Go provides. If you travel a lot, the convenience of the package could still be worth it at that price, though, especially if you plan to travel light.

At the time of this review, the Passport Go doesn't actually exist as a commercial product. We got our hands on an early sample during the Kickstarter campaign. So right now, the only way to buy one is in the form of a Kickstarter pre-order. Caveat emptor, there's always a risk when it comes to crowdfunding, even if we have a unit in-hand. The company seems to have a decent record of delivering the products it promises, but that's no guarantee for the future.