With the introduction of Plus models and decimals, HMD Global’s range of Nokia phones has taken on a somewhat bloated and hard to decipher form, far from the essential selection of handsets across various price points it started out as. With each new release, it gets harder for consumers to decide which budget phone in the burgeoning lineup is worth the money, which was no more apparent than when the Finnish company announced the Nokia 1 Plus, 3.2, and 4.2 at MWC back in February. The 4.2 appeared to be the most appealing of the bunch, and it went on sale in the US for $189 last month.

In spite of the increasingly confusing lineup, Nokia devices have garnered well-earned praise in the affordable smartphone space in recent years, partly due to HMD’s commitment to the Android One program and its timely, consistent updates. The Nokia 4.2 is one of the first models to benefit from the newly announced Google Cloud partnership that will see all activation and performance data stored in Finland, potentially leading to even faster updates. As well as an up-to-date version of Android, the phones have usually been well made and have often punched well above their weight in terms of performance and the overall experience. It’s therefore understandable that I expected good (if not great) things from the Nokia 4.2 ahead of putting it through its paces. I’m sad to say it’s fallen a little short of the high standard HMD has previously set. 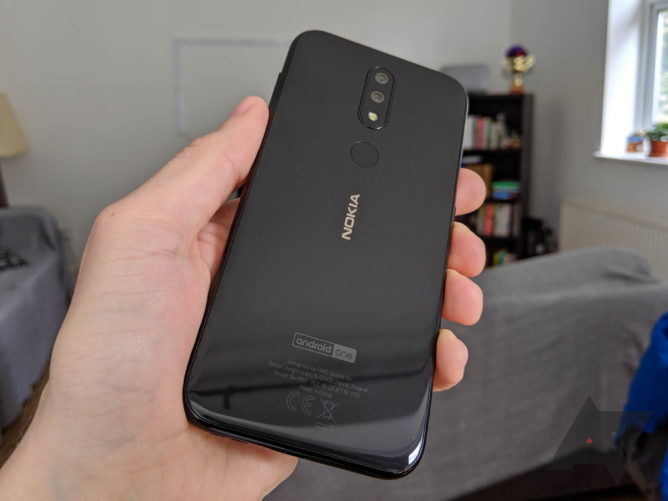 It’s been a while since I’ve used a budget smartphone, but I was pleasantly surprised by the Nokia 4.2 when I first took it out of the box. It doesn’t feel cheap, with its 2.5D glass sandwich construction, and it also has a reassuring weight to it. As with most Nokia phones, the design is minimal, clean, and inoffensive. I will say that the black model I’ve been using is an absolute fingerprint magnet, though. When you power the phone on, that’s when you start to realize that you’re dealing with an affordable device, since the display is instantly recognizable for its lack of quality. The resolution of the TFT LCD is HD+ (1080x1520), which is plenty of pixels for a 5.71-inch screen, but the brightness is the main problem with this panel — even when it’s pumped up to full you’ll struggle to see anything outside on a sunny day. The color temperature is also a bit cool, but a recent update to the phone brought with it a white balance adjustment setting so that’s easily rectified, at least. The bezels around the display are not especially thin, and the Nokia logo stares are you from the chin at all times, but I still wouldn’t say the phone is ugly per se. Compare it to a $200 phone from a few years ago and you’ll probably be pleased with how we’ve progressed. 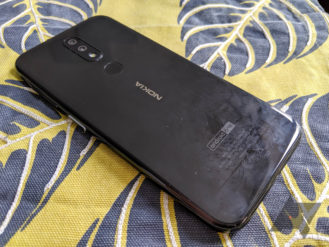 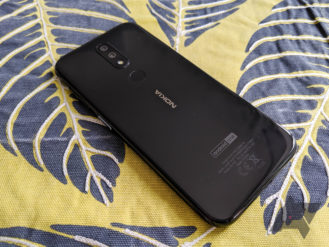 Fingerprints will build up if you don't use a case.

There is one particularly interesting hardware inclusion on this phone, as with the Nokia 3.2, and that’s the light-up power button. We’ve seen the notification LED disappear from some phones in recent years, but this phone’s novel approach is to make the power button light up when you receive an alert, and it can even be seen when your phone is placed face-down, too. For the first day or two, this was a welcome gimmick, and one that certainly sets it apart from other phones, but I did grow to dislike the feature. It flashes way too brightly and lacks customization options. It’s either on or it’s off — white is the only color available — and it doesn’t disable when in DND mode, so it keeps shining at night on the bedstand unless you switch it off altogether. This could be a popular feature eventually, but it really needs some polish.

The LED power button is pretty cool for about 5 minutes.

On the other side of the phone is a dedicated Google Assistant button, which also seems like it should be a good idea, doesn’t it? Maybe it is, but this also has some kinks that need ironing out. It’s all too easy to accidentally press it, and it will trigger even when your screen is off — there really should be a setting to disable it unless the phone is unlocked. When you do actually want to press it, the placement makes it easy to hit the power button at the same time. 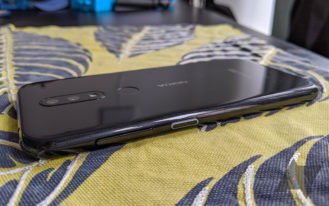 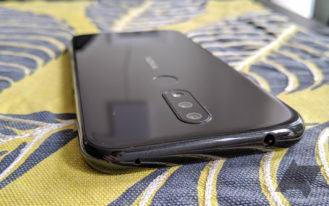 Since this is a budget phone, that means it retains the headphone jack on the top edge. That’s just as well, really, as the bottom-firing speaker is understandably not up to much and is easily covered when holding the phone in landscape. I found myself confusing the camera module with the fingerprint scanner in my first few days with the phone, but that was something I eventually got used to. It’s relatively fast to unlock, so no complaints there. Probably the biggest surprise in the spec sheet is that the Nokia 4.2 is NFC-equipped. That’s uncommon at this price point but is pretty vital for a phone sold in Europe or the US, so well done to HMD for including it. 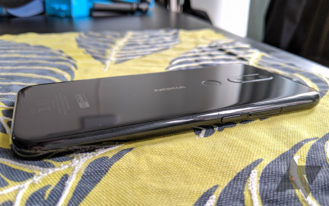 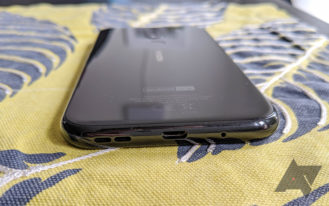 In the box of the retail version, you’ll find only a charger and MicroUSB cable (although my review device did not have these included) — there are no bells and whistles here.

If the hardware is uninspiring but acceptable, it’s what’s on the inside that really lets this phone down. On paper, the Snapdragon 439 processor paired with 3GB of RAM looks as though it should be sufficient, but sadly this isn’t the case. Performance is exceedingly sluggish — it can take a few seconds to open an app and certain actions feel like they take an age. The camera app is the worst offender, but we’ll get to that in a bit. Animations are such that it feels like an Android Go phone, most noticeable when swiping notifications away — they simply disappear. It essentially feels like you’re perpetually in battery saving mode. Since this is a $190 phone, you have to accept certain limitations, but HMD Global has made cheaper Nokia-branded phones that feel much faster and smoother than this, so this has to be considered a misstep. Memory management, by contrast, wasn’t so much of an issue, but poor WiFi and phone signal reception was another constant bugbear. 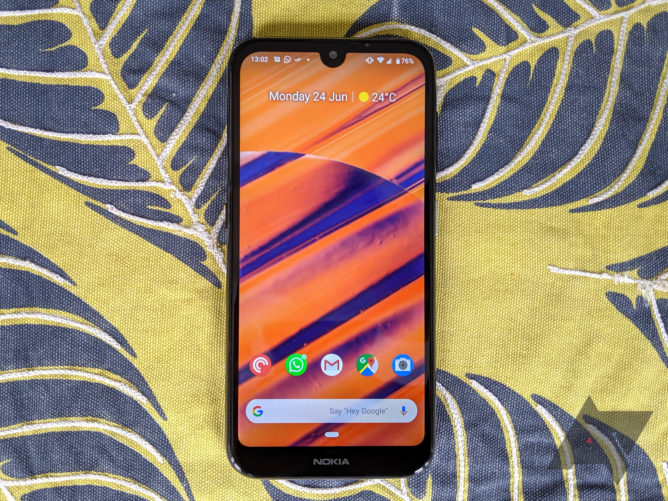 Other gripes with the software include an over-aggressive auto-brightness function, that when coupled with low brightness of the display means that you often have to manually fiddle with it to be able to see what’s on your screen. This did improve slightly with the one update I’ve had, though, so this is something that could be fixed down the line. The screen is able to wake for new notifications but since it’s not an OLED panel there’s sadly no Always-on Display setting — that’s understandable at this price, but it’s something I always miss when I don’t have it. Storage was another thing I struggled with on this phone since I used a backup from a more expensive handset and almost instantly filled up the 32GB with apps alone. Once I deleted some of the bigger nonessential ones I was okay, and starting from scratch or coming from a similarly limited device will be easier — you can live with that amount if you’re frugal. I still think 64GB should be the minimum most people are expected to get by on in 2019, however. For all of its problems, at least the Nokia 4.2 is an Android One phone, so you get a nice clean version of the OS and the promise of timely updates. HMD continues to impress with its commitment to lengthy software support, even for its cheapest models.

Battery life started off well, getting me to the end of the day with roughly 40-50% left in the 3,000mAh battery. Unfortunately, the longer I’ve used the phone, the worse it's become. It still comfortably lasts the day, with around 20-30% spare on less than 3.5 hours of screen-on time by the end, but the hope of getting two days out of it in a pinch has sadly faded — many budget smartphones offer more impressive longevity.

With a 13MP main sensor complemented by a 2MP depth sensor and an 8MP front camera, the imaging hardware ought to be sufficient, yet it’s very hard to take a nice photo with the Nokia 4.2. The camera app is unbelievably slow and laggy, to the point where I’m not sure if that’s the main issue when it comes to taking photos. The camera is capable of the occasional good shot but often struggles to focus in anything but perfect conditions. 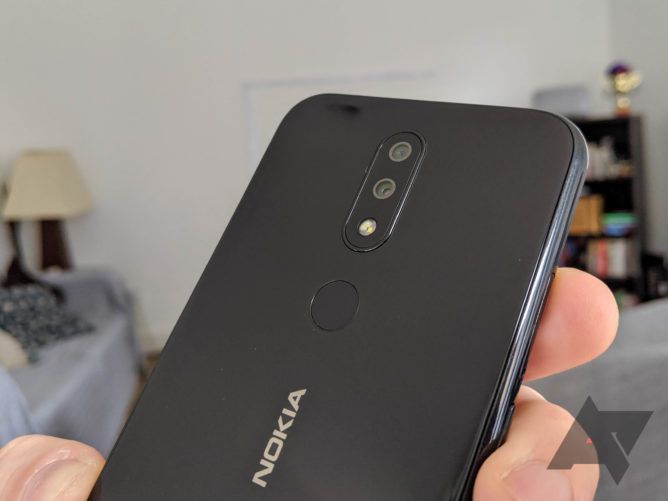 Any sort of movement on your part or something in the frame will throw it off and produce a horrible result. Color reproduction is okay but contrast is severely lacking and you end up with dull, washed out photos. You might expect passable bokeh effects thanks to the secondary lens, but it’s hard to keep all of your subject in focus unless it’s a truly one-dimensional object (or maybe a really shallow friend). It’s possible some of these issues could be corrected in a future software update, but it seems unlikely this phone will ever take photos you’d want to upload to your Instagram. I found myself taking even fewer photos than I’m naturally inclined to as I knew the results wouldn’t be pleasing. No. It’s rare that we aren’t able to recommend a Nokia device since HMD Global usually does a good job of offering the best experience possible at each price point. Sadly, there are just a few too many compromises with the Nokia 4.2, mostly relating to the performance. That’s not to say it’s an unbearably slow phone all of the time, just that there are better ways to spend $190. It’s getting on a bit now, but the Xiaomi Mi A1 cost only marginally more but performs fantastically and was also Android One. There’s also a slew of other Nokia phones at the same price or less, and since they get regular updates, there’s nothing wrong with buying a slightly older model that’s come down in price. This Nokia 6.1 from 2018 is now down to $184 and offers far greater value for money. You can also nab a Moto G7 Play for as little as $150 these days. You’re better off getting one of those instead. 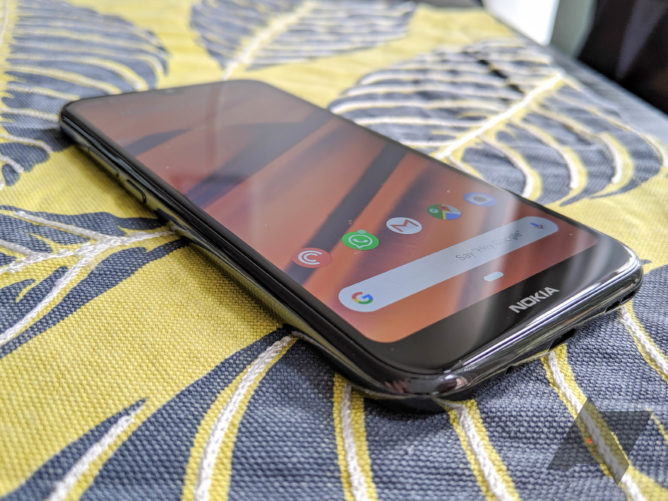