Amazon has mastered the art of selling cheap Android tablets. The company shipped roughly 11.9 million tablets in 2018, passed only by Apple, Samsung, and Huawei. The combination of decent performance, Alexa integration, and low prices have made the success of the Fire lineup difficult to copy.

Walmart is already competing with Amazon on several fronts, so it only makes sense that the company would try to make tablets too. The Walmart "Onn" comes in two sizes, 8 inches and 10 inches, intended to compete with the Fire HD 8 and Fire HD 10, respectively. I bought the $65 8-inch model for review, and while it won't break any speed records, it undercuts the Fire HD 8 and has a better software experience to boot.

To quote Han Solo, "She may not look like much, but she's got it where it counts, kid." The Onn 8 is a large slab of plastic with an IPS LCD screen on the front. There's also a 0.3MP front-facing camera, and on the bottom, you'll find a microUSB port for charging. I would have preferred USB Type-C, but at least the cable and wall adapter are included in the box. 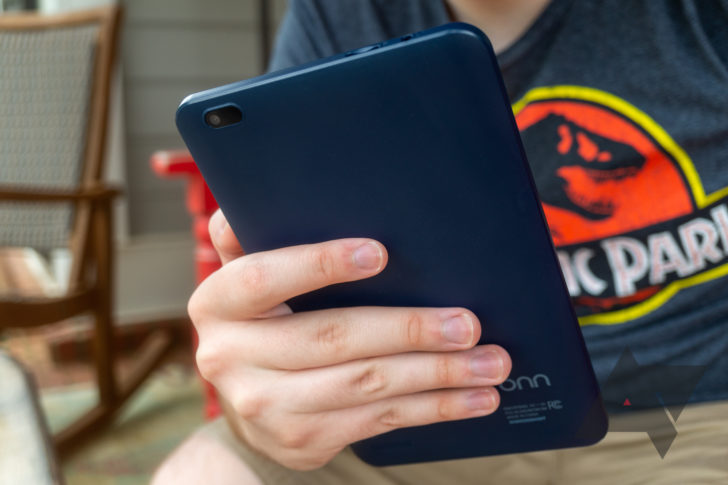 The 8-inch IPS display has a resolution of 800 x 1280, which lines up with other tablets in this price range. The panel itself isn't too bad ⁠— colors are decent, and it's bright enough to easily use indoors (though it becomes hard to read in direct sunlight). It comes with a screen protector pre-installed, which is definitely a nice touch, especially since children will be a primary audience.

However, when I peeled off the protector to take photos for this review (as my protector wasn't installed very well), I realized the screen underneath doesn't seem to have any Oleophobic coating whatsoever. Not only does that mean fingerprints and smudges show up very easily, but it's also hard to drag your finger across the surface — remember, this is plastic, not glass. If you buy this tablet, definitely do not take the protector off. 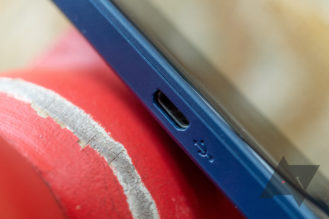 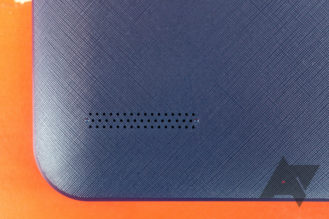 Another screen-related issue is that the Onn Tablet doesn't have an ambient light sensor, so it can't automatically adjust the brightness based on how bright its surroundings are. That's not a major inconvenience, but it does mean you'll be reaching for the brightness slider more often than you do on your phone.

The bottom of the tablet has a microUSB port, which doesn't support any kind of quick charging. Volume and power controls are located on the right side, and the top has a microSD card slot and a headphone jack. There's no cover on the SD slot, which is a bit strange — even the $50 Fire 7 tablets have that. 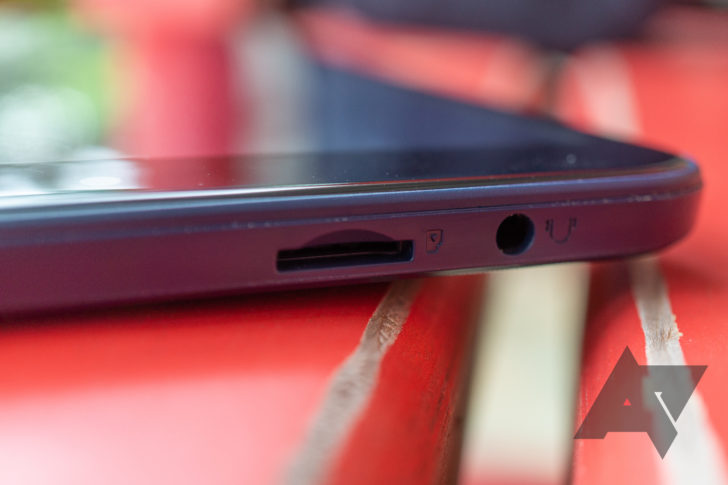 The tablet's internal hardware is modest, but enough for web browsing, watching movies, and light gaming. It has a MediaTek MT8163 processor, the same found on Amazon's current-generation Fire 7 and Fire HD 8 tablets. However, it's paired with 2GB of RAM, more than the Fire 7 and Fire HD 8 have (1 and 1.5GB, respectively). There's also 16GB of internal storage, though only 11GB is usable.

In the box, you get the Onn 8 tablet, a manual, a microUSB cable, and a USB wall adapter. 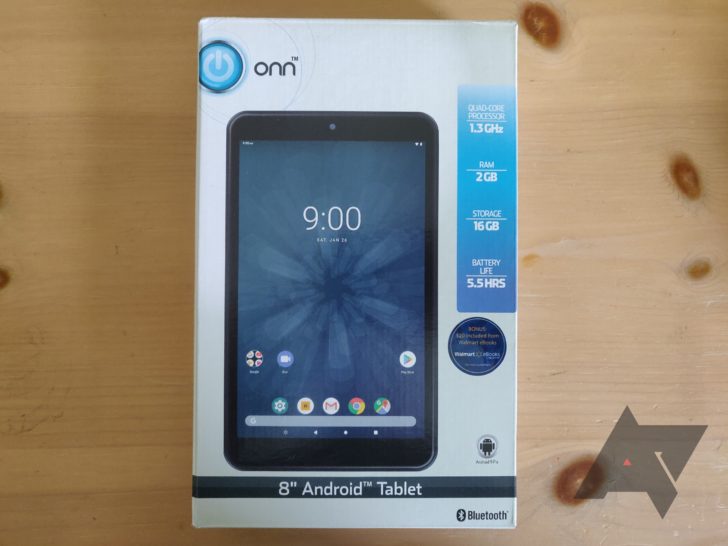 The Onn 8 uses a nearly-stock build of Android 9.0 Pie, which is definitely its greatest strength compared to Amazon's Fire tablets. You get the Google Play Store, all the apps you could possibly want, support for Google Family Link, notification channels, security features like Play Protect, and all the other features you would expect from the latest and greatest Android release. By comparison, even Amazon's latest Fire tablets ship with a heavily-modified build of Android Nougat, and many features are disabled. 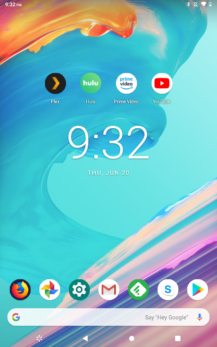 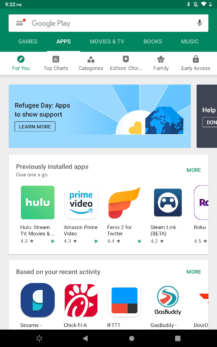 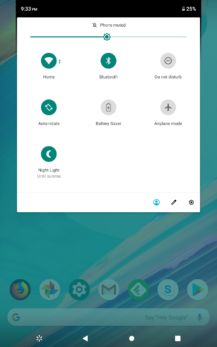 The only visible change to the software experience is the Walmart button located on the navigation bar, which opens a portal for Walmart apps when tapped. It's definitely annoying, but I'll take it in a heartbeat over the excessive advertising and system modifications found on Amazon's tablets. A handful of Walmart applications (Vudu, Walmart eBooks, etc.) are preinstalled, but they can be disabled.

One aspect of the software worth noting is that the default zoom level is extremely small — it's almost like the interface was scaled for a 10-inch tablet. Thankfully, this can be easily changed from the Settings app. 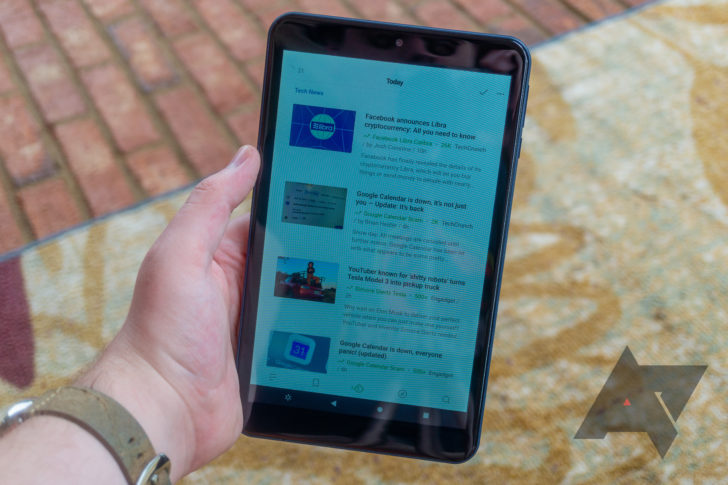 Performance in general is decent, but about what you would expect from a sub-$100 tablet. I had no issues checking Feedly and Twitter, browsing the web in Chrome and Firefox, watching TV shows in Hulu, or playing a bit of Fallout Shelter. Multitasking is definitely a struggle, and watching 60FPS video on YouTube or playing Minecraft pushed the tablets to its limits, but that goes for every phone and tablet in this price range. 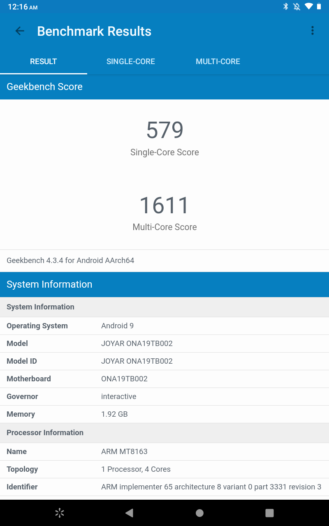 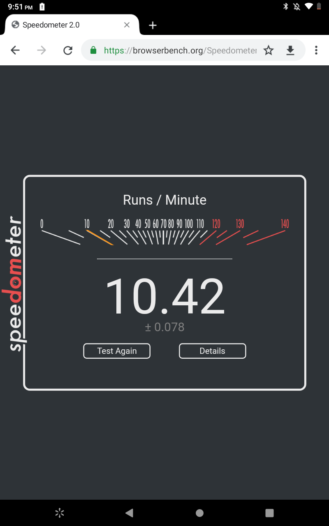 If you're interested in exact benchmarks, Geekbench 4 gave the tablet a score of 579 in single-core performance and 1611 in multi-core (full results). For context, the multi-core rank is similar to the HTC One M7. The Onn 8 also earned a score of 10.42 in Speedometer 2.0.

The official battery life estimate is 5.5 hours of use, and that was fairly accurate in my testing. If you're buying this purely for the occasional Netflix in bed, you'll be happy to know tablet can sit around for a day or two without draining its own battery.

It has a camera. Should you use it? No. Maybe. The Onn 8's main competition is the Amazon Fire HD 8, which costs $79.99 with lock screen ads, or $94.99 without. The Onn 8 comes in at just $64 (as of the time of writing), but is an improvement over the HD 8 in most ways — it has 2GB of RAM instead of 1.5, it runs stock Android 9 Pie instead of a gutted version of Android 7.1 Nougat, and you get full access to the Play Store and Google services. As funny as it sounds, Walmart's complete lack of effort towards the software experience is one of the tablet's best selling points. 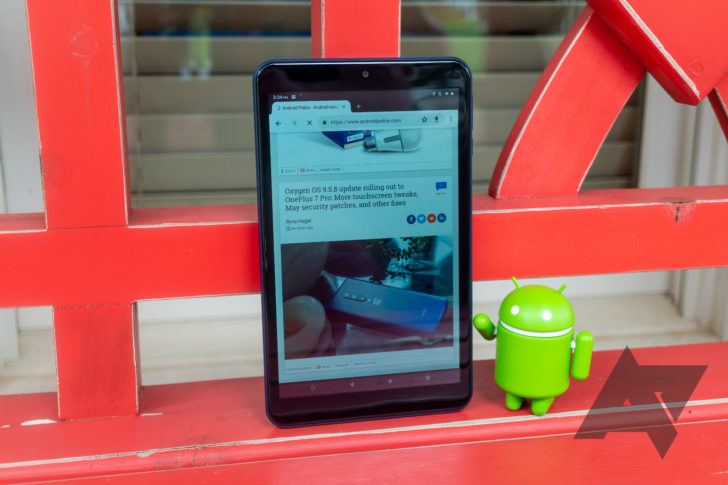 The lack of oleophobic coating on the screen is definitely the worst part of this tablet, especially since the bare plastic screen is terrible to swipe on. You have to keep the factory screen protector on, especially since it doesn't seem like there are any individual screen protectors available — not even from Walmart itself. The case situation is also grim, as this kid's case was the only option I found.

If the lack of an accessory ecosystem doesn't bother you, the Onn 8 isn't a bad tablet for the money. It can play videos, browse the web, and handle some games — what else do most people use tablets for?

Monday deals: Save on Sonos One, plus bargain wireless chargers and cheap smart lights