There are a plethora of different home automation platforms like SmartThings, HomeKit, Wink, Amazon Alexa, Google Home, and many more. Some of them play together nicely, but once you're mixing and matching, you're going to end up with a bunch of apps and hubs to control all of your devices, and some features just won't work with the provided software. Koushik Dutta (or Koush), the developer of beloved tools like ClockworkMod, has run into these limitations. To overcome his issues, he simply created a smart home hub himself that allows users and developers to script their own actions to interconnect their devices, similar to Tasker. Enter Scrypted.

The service is live as an app on the Play Store. It turns any machine running Android into a smart home hub, be it an old Android phone you can leave plugged in constantly, an Android TV box, or even a Raspberry Pi running Android Things. Once you've installed the app, you have the option to sign in with your Google Account so you can connect the platform to Google Home. Below, there's an IP address from which you can manage your smart home devices. That's all there is to see and do on your Android device. I personally chose my old Moto X 2013 as the testing ground. 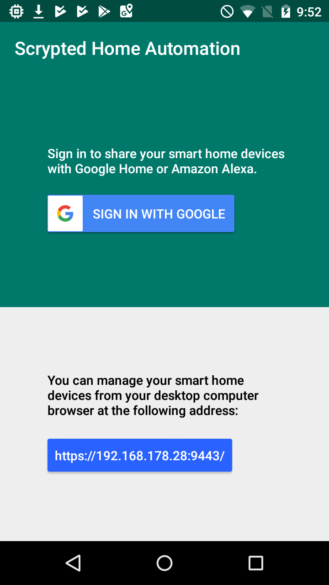 The magic happens once you head to the said IP address or home.scrypted.app, which both lead you to a website generated by your Android device. In this hub, you can set up all kinds of schedules, events, and controls in one central place.

Koush himself built the platform to connect his Chromecasts with his UniFi security camera. He wanted to be able to see the feed once the cameras detected a face. Since that wasn't possible with the regular software, Koush decided to take matters into his own hands and thus he "accidentally built a home automation platform," to use his own words. He is using an Nvidia Shield as his Scrypted server, since the device has enough computing power to process face detection locally. Along with this, Koush presents a couple of other use cases, like the ability to receive an alarm when your front door is opened or the option to automatically turn on exterior lights at sunset. 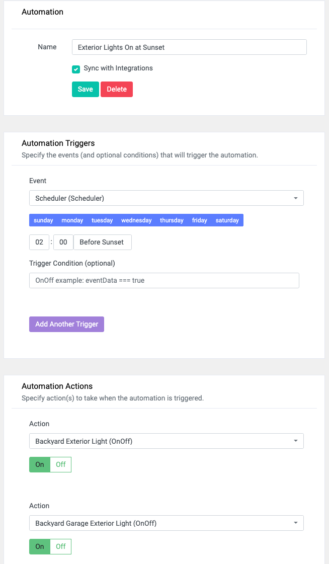 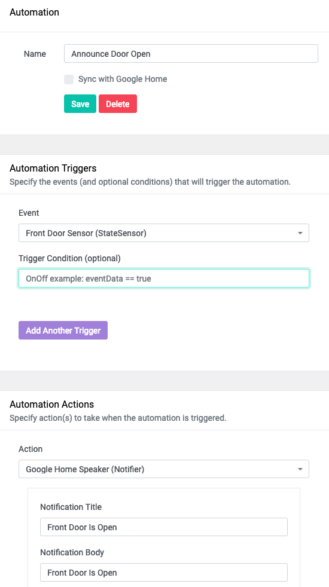 Devices can be connected to Scrypted via JavaScript plugins available on the web interface or npm, and interested parties can take it upon themselves to program more plugins to support their own devices. Simple scripts can be written right inside the management console, while more complicated projects can be imported from Visual Studio Code.

Even though the platform addresses advanced users, it's programmed to be as undisruptive as possible. New plugins can be tested against a running Scrypted server with no need to restart it. You can then install them without shutting down the server, too, so your system is always up and running. Due to included cloud access, the platform doesn't even require dynamic DNS — thus, plugins can easily generate webhooks which can be accessed by external services.

Another thing making Scrypted unbelievably powerful is its integration with Google Home, Apple HomeKit, and Amazon Alexa. This allows you to control all your plugins and devices through your preferred assistant. For example, you can connect your Scrypted server to Google Home just like you'd connect any other device: head to the Google Home app, tap the plus button, and search for 'Scrypted.' 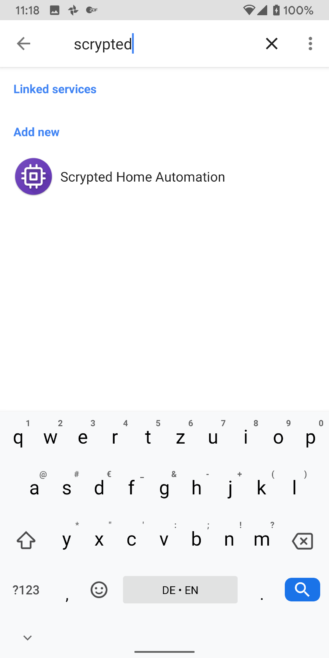 Right now, Scrypted only supports a couple of smart home devices, and most of these are the ones the developer himself owns. These include a bunch of Z-Wave lights, sensors, and locks, said UniFi cameras, Chromecasts, Google Homes, Neato Robots, MyQ garage doors, Lifx and Hue bulbs, and more. But due to the open nature of the project, the platform should support all major smart home devices once it gains traction with other enthusiasts. If you're a developer yourself and you have spare time on your hands, there should be nothing hindering you from creating your own perfect smart home experience, helping other users along the way.

Still, it's a pretty advanced project and takes a lot of enthusiasm and tinkering, but if the platform takes off, it should become more comfortable to use for someone without development experience, with more and more plugins or devices becoming available on it. Also, keep in mind that the software is still in an early alpha stage, with Koush confirming that it works for him and that he received a Google certification for the product, but it's not a given that the platform works without issues for anyone.

If you'd like to try the automation software yourself, go ahead and download it from the Play Store or over at APK Mirror. Just diving in and testing the app won't hurt, but if you'd like to read into the documentation and get further information before, you can visit Scrypted's website and Koush's Reddit post about his project.

Of course, Koush's solution isn't the only one available — there are also platforms like Home Assistant or openHAB which provide similar integrations. The big difference is that most other solutions run on desktop computers or Raspberry Pis but not on Android. 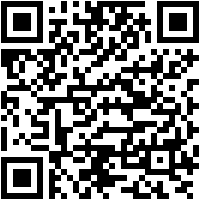 Alternate Title: Guy wants to see his UniFi camera feed on Chromecast with face detection, accidentally builds a home automation platform while at it.

"Huawei" is now a radioactive word — should the company rebrand?