Smart displays are still in their infancy. While they might take inspiration from the basic internet appliances that failed to take off in the 2000s (anyone remember the Chumby One?), smart displays as we know them today started with Amazon's Echo Show. The idea of adding a screen to a smart speaker may have sounded counterproductive at the time, since they essentially are less-versatile tablets, but smart displays have been an undeniable hit with buyers.

While smart displays have largely been marketed as shared devices best suited for living rooms, kitchens, or bedrooms, some have limited productivity features. They can read calendars, set reminders, and some can even place calls.

I received a Google Nest Hub a month ago, and my intention was to place it next to my desktop computer to function as an always-on calendar. As it turns out, there's no way to do that on the Nest Hub, or any other Assistant-powered smart display. It also can't do a lot of other functions that seem obvious for productivity work. The Nest Hub may have conquered bedrooms and kitchens, but with a few feature updates, it has the potential to become an irreplaceable workplace tool.

"Show me my calendar"

That's what I end up saying to my Nest Hub on a daily basis. As previously mentioned, I had hoped there would be an option somewhere to always show upcoming events, just like it always shows the current time and weather. I would have even settled for something like Google's 'At A Glance' widget, which replaces the centered date and time with information about upcoming events once they are a few hours away.

When you're not actively using the Nest Hub, it switches to what Google calls 'Ambient Mode.' By default, Ambient Mode flips through pictures from your Google Photos library, but there are plenty of other options available. You can set it to cycle through curated artwork, show a full-screen clock, or even display images from a Flickr or Facebook account. Why not a calendar, too?

I know at least a few of you are rushing to the comments section to blurt out something like, "Hey Corbin, if you want an always-on calendar next to your desk, get a wall calendar!" Here's the problem with that approach — I'm not the only one managing my schedule. Whenever an item gets assigned to me in Basecamp, the task-management system we use at Android Police, Basecamp adds the item to my calendar. If the due date changes (as my tasks often do), the item moves around on my calendar automatically. Keeping a tablet with Google Calendar always running isn't ideal either, nor is buying another monitor for my PC.

One complaint I've seen a lot is that you can't easily add calendars from a G Suite account to a smart display registered under a different (personal) Google account. For example, there is no way for me to see the shared Android Police calendar on my Nest Hub, even if I ask for upcoming events. If the calendar isn't set to private, it's possible to copy the calendar's URL and import it into your own personal Google account, but that's hacky and time-consuming.

Calendar wishes aside, there's another simple time-related feature that isn't on any Google smart displays: multiple clocks. After nearly three years of working at Android Police, I've finally memorized that I need to subtract three hours from my time zone to match the AP server clock (hold your applause), but I still ask my Nest Hub anyway whenever I'm writing embargoed content, just in case. Such a feature would definitely help anyone working remotely — which will be the majority of the U.S. workforce within a decade — as well as anyone with friends and family living far away. 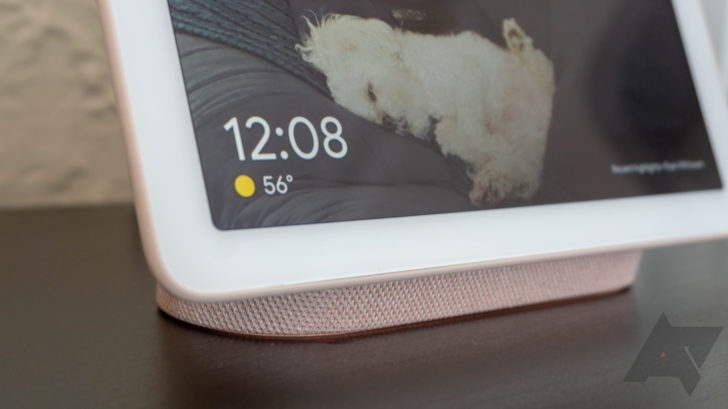 Another great feature would be a web browser, which Amazon's Echo Show already has (though that's out of necessity to watch YouTube content). Assistant smart displays technically already have Google Chrome, but it's not easily accessible and has countless limitations. At least if there was a web browser, I could build my own dashboard with a calendar and other information, iGoogle-style.

Timers and other methods of personal time-tracking are also growing in popularity — nothing puts your lack of productivity in perspective like realizing you spent three hours on YouTube in the middle of a work day. However, there's no ability to start a stopwatch on Assistant smart displays, only alarms and timers.

All out on G Suite

If you're not familiar with it, Google maintains a suite of services and applications for business customers, fittingly named G Suite. While G Suite is primarily software-based, with products like Gmail and Drive, the company has also built hardware intended for use in G Suite workplaces. One example is the Jamboard, a giant digital whiteboard that can pull data from Google Docs and perform Hangouts video calls. Google also worked with Asus in 2017 to develop a Chromebox for video conferences.

Smart displays with cameras could even be used to join Hangouts Meet group calls.

The Nest Hub could potentially be another hardware product to sell to large businesses invested in G Suite, if Google was interested in going all-in on the integration. The display could be used to send emails with voice commands, search for and preview Google Docs files, receive calls from a company Google Voice number, and so on. Smart displays with cameras, like the Nest Hub Max and Lenovo Smart Display, could even be used to join Hangouts Meet group calls.

Work computers and dedicated phones can already handle these tasks, but having a simpler device that can offload tasks from a PC (or continue functioning if a PC goes down) could be worth the cost in some circumstances.

Even though making smart displays a work aid is probably very low on Google's list of priorities for the Nest Hub, it already makes my work a bit faster and easier. I can ask what's coming up on my work calendar, instead of reaching for my phone or switching between two Google accounts on the Calendar web app. It can answer simple math problems and convert currencies quicker than I could type "calculator" in the Windows Start Menu. The Nest Hub also makes a great miniature TV when I'm working on more menial tasks.

With only a few minor improvements, the Nest Hub (and all other Assistant smart displays) have the potential to become fantastic work aids. I sincerely hope Google puts in the effort to make that happen, but at the very least, the calendar Ambient Display would be nice.