When investing in a security camera, you usually have to pick whether you'll use it indoors or outdoors, mostly because the latter are weatherproof and built to be more durable. Unfortunately, when you move out or decide your security device would have made more sense in another location, you end up having to purchase a new one — or end up with a bulky camera in your house if you went for the outdoor model. Thankfully, Canary's Flex cameras are, as their name might suggest, quite versatile as they work both indoors and outdoors while remaining discreet and resistant to harsh weather conditions. The bundle with two cameras just dropped to $250 on Amazon, instead of its original $380 MSRP.

The Flex have a 1080p HD sensor with a 116° wide-angle lens, night vision, pan, and zoom. They connect directly to your router over Wi-Fi and don't require an additional hub. Their setup is also easy, and the cameras can operate using either corded power or run off their built-in 6,700mAh rechargeable battery. As mentioned above, they're discreet but also designed to withstand harsh weather conditions between -4°F and 113°F. 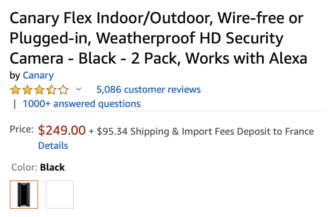 You get a bunch of advanced features with these cameras, including 24 hours of video clips stored on the cloud, person detection and smart alerts, as well as configurable privacy and night modes. You'll also be able to stream a live feed on your phone but will have to sign up for a paid subscription to do so on your computer. Besides, the premium membership gives you access to two-way audio to talk to intruders or visitors and 30 days of cloud video recording.

The Flex is available in both black and white, but the latter will cost you a $6 premium. This new price is the lowest they've ever been from Amazon, although it has been dropping steadily for over a year. If you're sure you won't need to use your camera outside, you might want to consider Canary's all-in-one indoor camera, which just dropped to $50.