Samsung isn't known for gracefully aging devices, with previous generations quickly falling out of the company's favor. However, the firm is getting better at providing timely updates, as the Galaxy S9 received the rethought One UI along with Android Pie in December, giving it the same software as its successor. Now, the aging flagship received another update that improves the camera, giving it a dedicated Night Mode and further refinements. 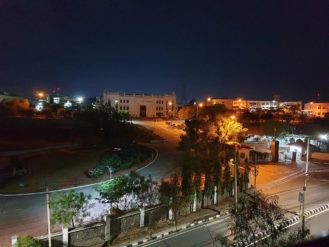 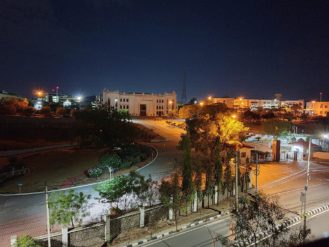 Source: SamMobile. Tap/click the images to compare them in greater detail.

Our colleagues over at SamMobile took a quick test shot to compare the improved performance at night, and indeed, the images have become slightly brighter. The mode isn't as powerful as the Pixel's Night Sight, though. We can see a lot of added noise in the night mode photo, and details are only slightly more visible — take a look at the dark patch on the trees on the left. In night mode, we can see more individual leaves, but the added sharpness of the image doesn't really make it more beautiful.

Other camera tweaks in this update include an added background blur intensity bar for both the front and back cameras. Besides image processing, the Messaging, Contacts, and Gallery apps got stability improvements, and the security patch level was elevated to June.

As always, the update is rolling out in stages and can also be held back by your carrier, depending on where you bought your phone and which processor variant you own. If you'd like to check if the new software is available to you, head to Settings > Software update > Download updates manually.

Note9 gets Night Mode too

Following on from the recent update to the Samsung Galaxy S9 that brought Night Mode to the phone, the Galaxy Note9 is receiving a similar upgrade. As reported by SamMobile, firmware version N960FXXU3CSF9 is rolling out to Note9 devices in Germany at present, weighing in at almost 704MB. As well as a Night Mode feature that is sure to be popular among users, support for scanning QR codes has also arrived for the Samsung camera app — previously, you had to awaken the mostly useless Bixby to carry out that task.

Just like the update to the Galaxy S10, other camera improvements are touted for the Note9 camera, and there's also a security update included. The new firmware is gradually rolling out to users across the globe, so keep an eye out over the next few days.

Smartphone-only internet use in US has doubled in six years