Noise-cancelling headphones are popular among business travelers, those in loud, open office spaces, and frequent commuters for a reason: they make life just a little bit less stressful. But good ones remain a product largely aimed at those with a good amount to spend - Bose and Sony's popular models retail for $300 and $350, respectively. The new Jabra 85h are priced to match Bose's jetsetter staple (seriously, the number of QC35s you'll see in business class cabins on airplanes is crazy), but have already dropped to $250 in promo sales.

While matching or even undercutting Bose for price, Jabra's headphones offer noticeably superior noise cancellation in most situations, better audio, and much better battery life. While the Bose name enjoys far more cachet among frequent flyers, Jabra's given them every reason to do a double-take with these headphones. 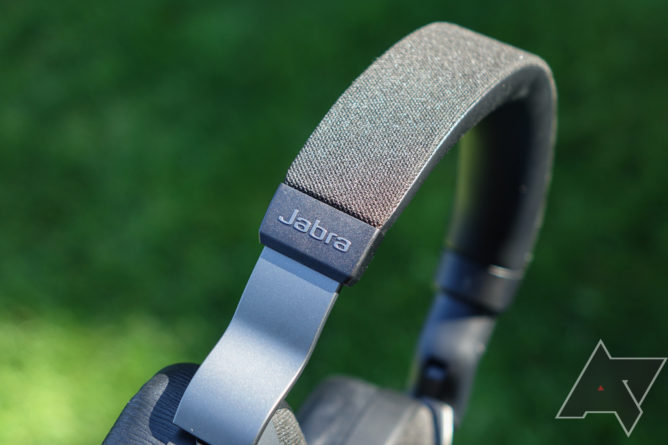 The Elite 85h use a low-tension band system to stay attached to your head without putting too much pressure on your ears. When I first tried them on at CES this year, the engineers told me they'd specifically designed the 85h to be comfortable for individuals who are, let's say, cranially gifted. As in, people with big heads (being from the Scandinavian region, Jabra considers this a real design priority). As such an individual, I felt the 85h were very comfortable and did not squeeze my noggin. The ear cups are large and spacious, too, minimizing pressure. 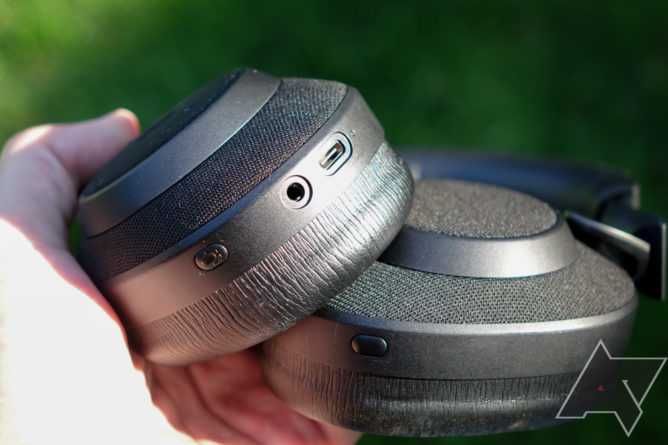 Controls on the 85h are dead simple once you've figured them out - the right ear cup has volume up at the top, play/pause in the middle, and volume down at the bottom. The Assistant button is out the outside of the ear cup and is easy to hit with your right thumb. On the left ear cup, you've got a single button for activating or deactivating noise cancellation, and a middle setting that turns on the "hear through" mode, which will play ambient noise into the headphones. It works surprisingly well thanks to Jabra's multi-microphone array, though don't count on it for more than basic left and right directionality (because, well, that's how stereo audio works). 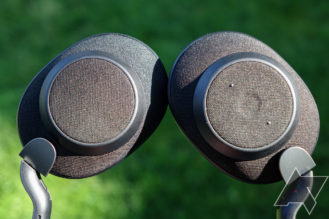 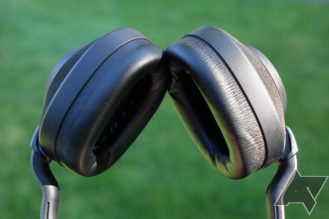 Power off (left), power on (right)

Turning the 85h off and on is merely a matter of twisting the right ear cup into the deployed or storage position, making it unlikely they'll accidentally get turned on in a bag. There are 3.5mm and USB-C connectors on the left ear cup as well, the latter is for charging, the former if you want wired audio to increase the already ridiculous battery life of the headphones.

The 85h come with a carrying case, 3.5mm cable, USB-C charging cable, and an two-prong airline adapter in the box. They're warrantied for two years against water or dust damage.

The sound quality on the 85h exceeded my expectations, with full, balanced bass and reasonably strong mids, and highs that are clear but not shrill. Compared to the Bose QC35, bass feels less muddied and highs less screechy, though some may prefer the more "boosted" audio profile Bose is known for. I found the 85h comfortable to listen to for extended periods on a long flight, and didn't notice any fatigue. 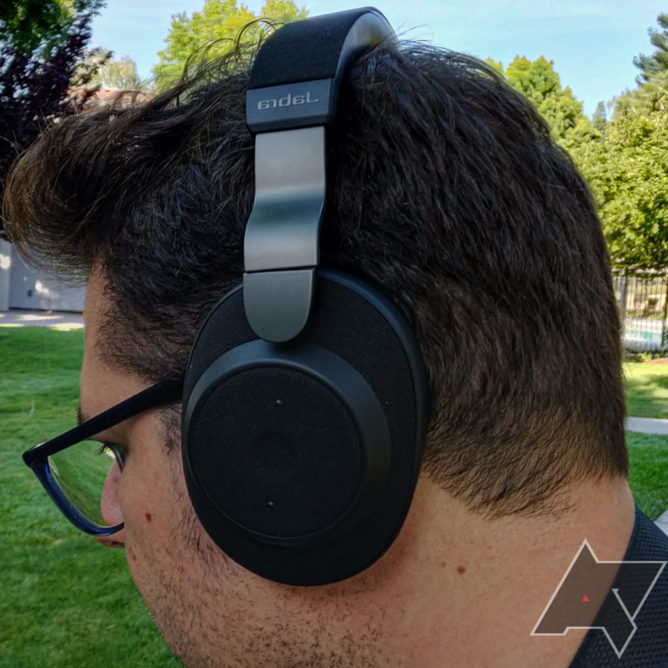 The quality of active noise cancellation is excellent. Unlike my QC35s, the 85h seemed less susceptible to aberrant seat vibrations causing an annoying and excessive alteration of the noise cancellation signal, which I came to really dread when trying to sleep with the Bose. Overall, the cancellation seemed to adapt well to most situations and conditions, though obviously isn't capable of magic: loud car engines and voices weren't really muted at all, but that's just the nature of ANC - no headphone drowns out those noises very successfully. I did notice that the lower threshold for the noise cancellation was an issue, which could cause random, quiet hisses to come through as the headphones attempted to adapt. It wasn't a super big problem, but if you use ANC headphones all day in a quiet environment or home office, it could get annoying. 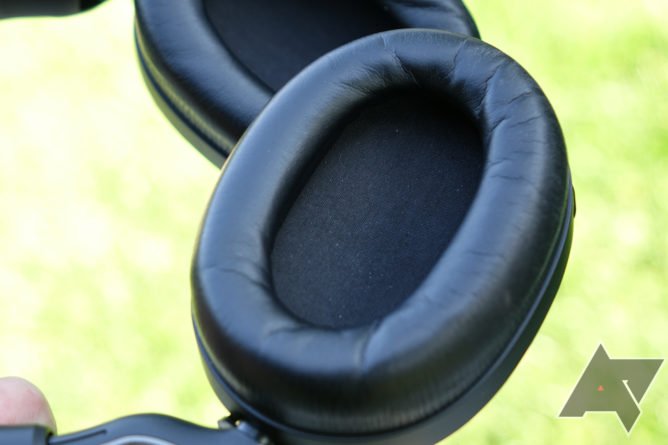 There's a companion Jabra app that offers profiles for different noise conditions, but I found the detection of "scenes" was unreliable at best and tended to be slow to respond or flip-flop between audio profiles, essentially making the feature useless. I also don't like that the app is a constantly running service on my phone, so I uninstalled it pretty quickly.

Battery life, as I said in the summary points at the beginning of the review, is rated by Jabra at 36 hours with ANC enabled while playing back audio at a reasonable volume - I felt no reason to doubt that figure, and I rarely had to even charge them during my testing.

Yes. (Update: The 85h do support multi-endpoint pairing, for whatever reason I couldn't get it to work the first time I tried), I believe the Jabra 85h are the high-end ANC cans to get for all but some serious corner cases. The Elite 85h are extremely comfortable, charge via USB-C, have incredible battery life, and are designed thoughtfully with easy access to playback controls and Jabra's well-executed hear-through tech for that occasionally-needed situational awareness. Jabra has built what are easily the best value and overall experience in ANC headphones right now.

The lack of a built-in Assistant or features like aptX and LDAC high-fidelity codecs shouldn't concern most people. Access to Google Assistant (or Alexa, should you be so inclined) is still one-button simple, you just won't get audible notifications for things like texts and reminders. As to audio quality, the 85h are going to sound great to most people even streaming 128Kbps MP3s - these high-res codecs just don't matter much on headphones where the primary feature you're paying for is the ANC, which perceptibly distorts sound anyway.

Barring real hang-ups about the above, I think the best choice in ANC headphones right now are the Jabra Elite 85h, and I'm giving them our Android Police Most Wanted pick. 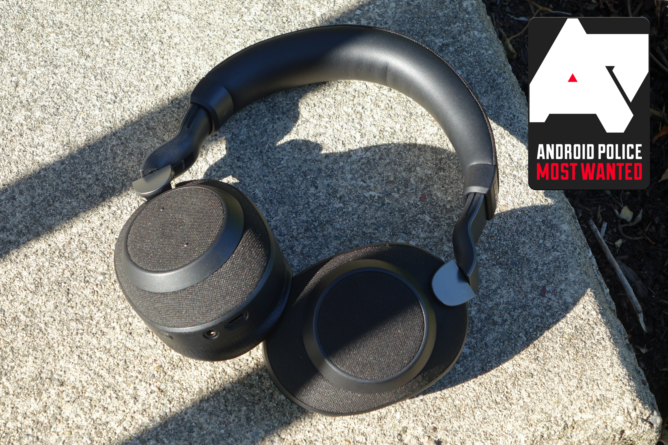