In the wake of carrier delays and missteps, Google has decided it's taking the reins when it comes to the future of phone messaging and RCS. The Verge is reporting that Google will be spinning up its own RCS/Chat services later this month for users in the UK and France, with support coming to other areas "throughout the year," though there is no firm timeline or list of markets.

Google's RCS system will reportedly be opt-in, with a prompt appearing to enable the feature in Messages for those in supported markets. Unlike carrier implementations, Google's should work via the Messages app on most recent devices, and will be inter-operable with other Universal Profile devices/carriers. Best of all, folks in supported markets won't have to wait on carriers to roll out support for RCS, Google's solution will work on compatible devices independently. 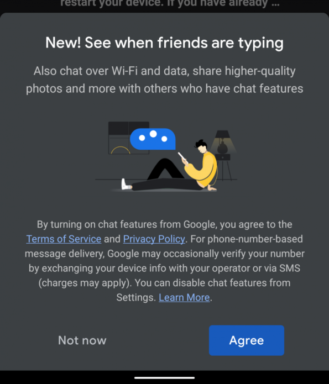 Opt-in message at least one of our readers received on an O2 MVNO in the UK.

Google can circumvent the carriers when it comes to RCS and messaging because of how RCS works, using a decentralized, "point-driven" federated model, which queries targeted phone numbers for compatibility as required. All that is really necessary for Google's RCS/Chat is that the device and app support it. I'm told that Google's RCS solution is basically ready to go and the company is simply placing its own carrier/device limits — one can root a phone on Verizon, change the device ID, and connect to Google's Jibe/RCS right now, as the Pixel 3 and 3 XL can when used on the carrier.

When Google's system rolls out more widely, compatible devices can simply and individually negotiate to send RCS messages between themselves, so those in a group conversation without support can still participate via SMS. And in the event a carrier/device combination already work with the standard, Google will let the carrier handle your messages.

Google's RCS implementation won't be end-to-end encrypted, though Google claims it won't be storing information (including metadata) any longer than it needs to deliver the message — at most holding it until you and all other recipients come back online for message delivery. It also sounds like Google might be working to bring encryption to the standard itself, since it lacks any right now. Product manager Sanaz Ahari told The Verge:

We fundamentally believe that communication, especially messaging, is highly personal and users have a right to privacy for their communications. And we’re fully committed to finding a solution for our users.

With carriers dragging their feet now for years when it comes to RCS, Google taking charge in at least some countries should help the enhanced messaging standard spread, though it's sure to turn a few critical heads, as well. Part of the RCS's advantage was a lack of centralized control, and Google pushing its own cross-carrier, cross-device system might be a much-needed stop-gap, but it also serves to centralize what should have been decentralized, and will only serve as fodder for any Google-critical privacy-skeptical positions. 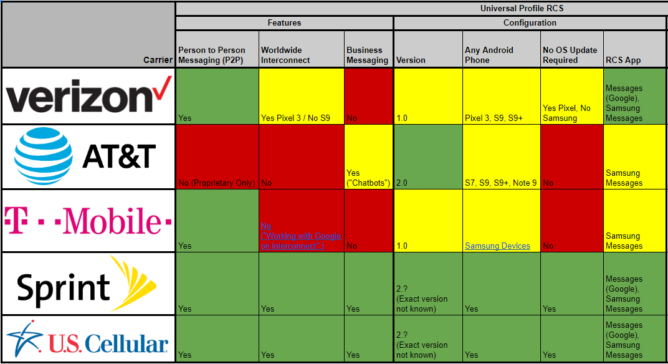 Google taking charge of RCS via its Messages app fixes that problem, at least for folks with compatible devices in supported countries. We've already received at least one report of the feature rolling out in the UK, so Google is certainly moving fast. Again, there's no clear schedule or list of markets that may receive RCS courtesy of Google, but here's hoping it eventually comes to the US.