A new variant of the Nvidia Shield has popped up on the Google Play Developer console. The new hardware goes by the hardware codename "mdarcy," in contrast to the current model's "darcy," and it will run Android 9 Pie.

There are a few differences between the two hardware listings, but chief among them is support for the Android 9 SDK on the new version, which would indicate it will be launching with Android 9 Pie. The new "mdarcy" listing has the same Tegra X1 T210 SoC listed as the current Shield TV, but that doesn't necessarily mean the hardware is unchanged. This could just be a placeholder, and an updated t210b01 Tegra SoC has been spotted in connection with it, though it could also go by the same X1/T210 product name. 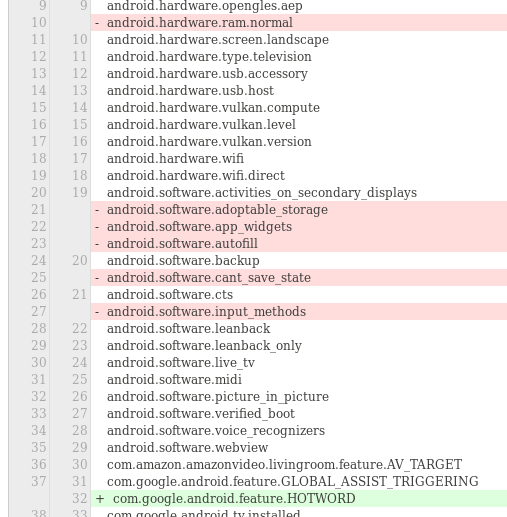 Difference in features between mdarcy (red) and darcy (green), white is shared.

There's a hotword system feature associated with the darcy hardware that isn't present in mdarcy, and we aren't sure why. Although there's a new mention of adoptable storage in mdarcy, previous hardware supported the feature as well.

This new model appears to be a minor refresh, as the barely-changed "mdarcy" hardware codename would imply. It's speculative, but this refresh could also accompany a general update for the product line to Android 9 Pie — Nvidia's 2015 Shield TV is among the longest-lasting hardware to ever run Android, and the company has continued to update it even as the slimmer 2017 model replaced it. As we previously mentioned, some of the details in the Play Console listing could also be placeholders, and there may be other changes and newer features associated with this new hardware.

Xiaomi is bringing Android Q to 13 phones starting this fall