Search is Google's bread and butter, its raison d'être, and almost certainly the company's most widely used product. Last month Google revealed a new focus on instructional how-to content in Search, and we've received reports that Google is showing "in this video" bookmarks below YouTube video results in searches made from the Google app.

Before and after/without and with the new "in this video" bookmarks.

The new "in this video" bookmark feature shows up below some videos when searching via the Google app. It manifests as you see above on the right, as a timeline studded with marked timestamps. Below the timeline is a sequential, right-scrolling list of the timestamps and their descriptions. In some cases, the individual bookmarks come with thumbnails (as in the example further below) but not always (as above). Tapping one of the titles/thumbnails opens the video at that timestamp. Bookmarks which are currently shown in the side-scrolling list are highlighted in the timeline with brighter blue dots.

The larger video thumbnail itself also moves its accompanying descriptive text into an overlay, with a mild gradient background, freeing up the space below for the new bookmarks. 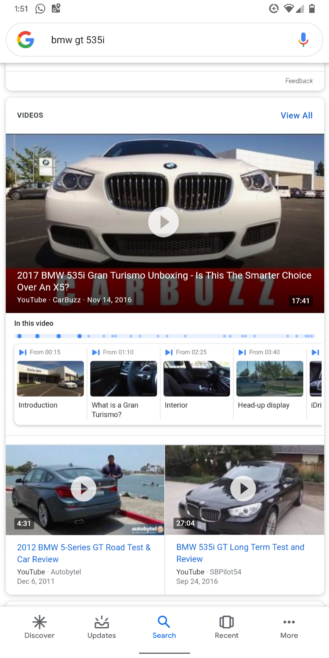 Odd white space appearing the same videos for some.

In at least one case, we're seeing what appears to be an incomplete rollout of the feature, with a huge white space appearing beneath video results in search where the new bookmarks appear for others.

Based on two videos from the examples above which show these new "in this video" bookmarks, it appears that Google is pulling the bookmarks and their titles from timestamped links in the video's descriptions.

Not everyone appears to have the new bookmarks in the Google app's search results — anecdotally, they aren't live on my devices — so it's likely to be yet another server-side/flag-related rollout. (At any given point in time, the Google app seems to have at least a hundred different tests associated with it.)

One of our tipsters reports seeing the feature on v10.7.4.21 of the Google app, which is the current beta release. If you're determined to check out this feature, make sure you've opted in on the Google app beta (which can sometimes be buggy, YMMV) and then check that you're updated over on the Play Store. If you'd like, you can also just download and sideload it from APK Mirror.

Chrome Beta 76 adds lazy loading for images, supports site dark themes, and even sneaks in a ...

Xiaomi ends MIUI beta program, claiming too many users and not enough feedback