Flagships tend to sell for a lot less shortly after they're released. Indeed, we've seen the example of the Galaxy S10's price plummeting in the months following its announcement, and the G8 is no exception. Indeed, LG's device became available in the US just two months ago, but B&H is offering a $200 markdown until tomorrow night.

The device features a 6.1" AMOLED display, 128GB of internal storage, 6GB of RAM, and is powered by a  Snapdragon 855 SoC. It has two rear cameras: a primary 12MP shooter and a 16MP wide-angle lens, as well as an 8MP selfie camera. Just like its Korean rival, LG has kept the 3.5mm audio jack, which will save you the need for an extra adapter. 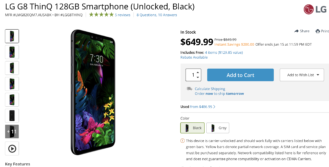 The device is unlocked and supports both CDMA and GSM bands, including the ones in the US. In addition, the reseller is throwing in some free goodies: You'll get a case, screen protector, Morphie 10,500mAh power bank, and a 3-month 8GB Mint Mobile prepaid SIM card.

If you're interested in this deal, hurry before it's too late, as you only have until June 15 midnight EDT to make your purchase.