As expected, Samsung is full of announcements today, including a new, slimmer successor to 2017's Gear Fit2 Pro that looks to be a direct competitor to the Fitbit Alta HR/Charge 3. The new pair of fitness-focused wearables go by the name Galaxy Fit, with a lower-end black and white display model gaining the "e" suffix. Both of these fitness-oriented wearables do activity and sleep tracking, run similar software, have built-in heart rate monitors, "full touch capabilities," and are water resistant to 5ATM, but the similarities end there.

(Apologies in advance, Samsung disabled rewinding on its Unpacked 2019 livestream, so we may update this post with additional details later.)

The Galaxy Fit is the higher-end of the two new slim wearables, featuring a nearly 1" 120x240 AMOLED display, a bit of extra memory, an additional gyroscope sensor, a bigger 120mAh battery, and wireless charging. Samsung also called it "as light as a strawberry..." which is a tremendously useful comparison. In more real-world terms, it's 24g. It's expected to come in Black and Silver. 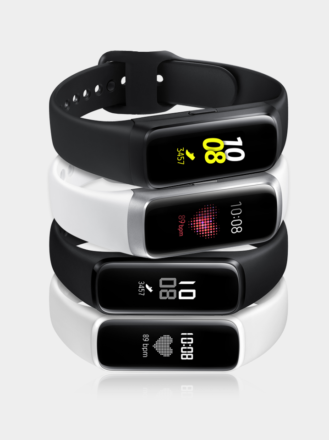 The Galaxy Fit e looks like it should be the cheaper model, with a smaller (0.74") lower resolution (64x128) PMOLED display. It also skips out on wireless charging, using an old pogo-style connector instead. It's also physically smaller and lighter, shaving a few mm off most of its dimensions, and weighing in at a mere 15g. It should come in Black, White, and Yellow.

At the event, Samsung claimed the Fit could last "a week on a charge," but it wasn't immediately clear if this statement applied to both of these models or merely the larger, higher-end variant, which has a much bigger battery.

Galaxy Fit now on sale in the US

The more impressive of the two fitness trackers Samsung announced back in Feb is now on sale in the US. The Galaxy Fit is available from the official Samsung site for $99.99, and comes in either Black or Silver colorways. If you order today, it will ship by June 18, so that's not too long to wait. There's no word on when the cheaper Fit e will go on sale just yet, nor is there any information about availability in other regions, but we'll keep an ear to the ground.