Tab grouping is a feature many Chrome users are excited to get, especially since other browsers have been capable of similar for a while. The feature is still a while away from being released in the stable version of Chrome, but the latest update in the Canary channel includes colors for each group and automatically opening links from the same site in the same group. The Send to Self feature for sharing tabs with Chrome on another device now has a history page.

As reported by Chrome Story, tab groups in Canary now have colors to help you keep track of which is which, although these colors are so far not customizable. The automatic grouping for the same site is handy, although it might be better if you could disable this on a per-site basis — it might not always be how you want to separate your tabs. It's all pretty buggy at the moment, and hard to click on the lead tab in each group without using keyboard shortcuts instead at times, but it's still early days. It's also not yet possible to rename the groups, although I'd expect that to be on the roadmap. 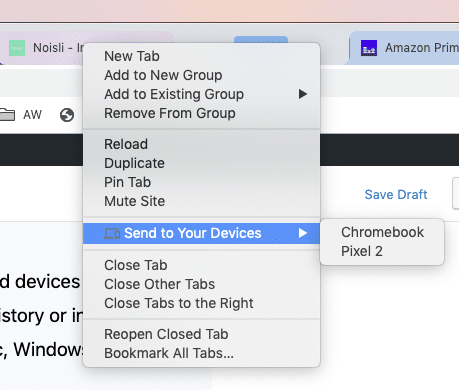 Send to Self is another interesting feature that will come to Chrome eventually. It's an easy way to share URLs between your devices, and a new history function has been added in the latest update. This will allow you to see any tabs you've previously shared, which could be super useful. It doesn't actually seem to be working yet, but it's good to know it's coming. The existing option to send a URL now has a device selector so you don't have to send it to all your phones, tablets, and laptops each time. There's also an icon for this being tested in the Omnibox for easier access.

Both features are currently available through flags that are not turned on by default. To switch them on and try them out, navigate to #tab-groups or #enable-send-tab-to-self-history in chrome://flags/.