Hitting a billion installs on the Play Store is so passé — over thirty apps have now reached that milestone. Hitting 5 billion installs, on the other hand, puts you in an elite group with YouTube, Maps, and Search — and Gmail just made the cut.

While Gmail may not be everyone's email app of choice, most users do end up using the app at some point in time. With the demise of Inbox (may it rest in peace), and the acquisition of other apps like Newton Mail, Accompli, and Astro, it seems like more people are switching to using the Gmail app — it even hit 1.5 billion active users last year. 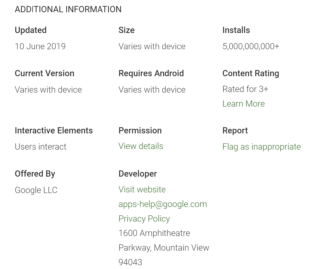 That being said, since Gmail comes pre-installed on Android devices, a large number of these installs are automatic rather than deliberate.

So far, only apps by Google have reached the 5 billion installs mark, but if I were to guess, Facebook and WhatsApp are probably not too far from the milestone either.