4K TVs are getting pretty cheap these days, even big ones don't cost much now, but the truly high-end OLED-based TVs maintain a stratospheric premium. For the next ten hours, though, you can pick up a decent-sized 55" 4K LG-made OLED TV over at B&H Photo for one cent under a grand. In the parlance of discount-seekers, we call that a "screaming deal." 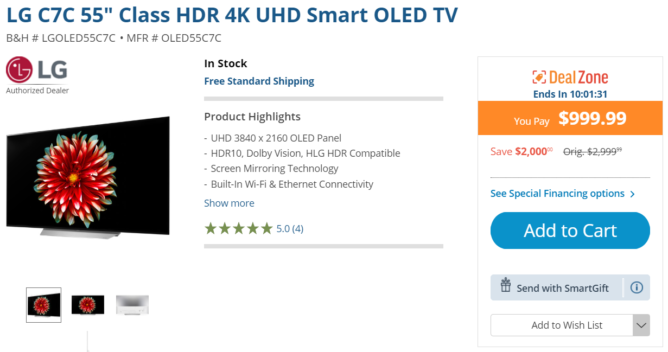 Spec-wise, you're getting LG's 2017 OLED tech, so don't expect all the latest stuff. The UHD resolution panel (3840 x 2160) supports HDR10, Dolby Vision, and HLG HDR standards. It's also "smart," running LG's WebOS 3.5. You get 4 HDMI inputs (one with ARC), plus an RF antenna, RCA composite, and optical audio. It has Ethernet for wired networking, but it also supports Wi-Fi for a bit more convenience.

Rtings (or one of the most trustworthy and comprehensive TV review outlets around) gave it a pretty solid score in their tests. Among its few drawbacks were typical OLED issues, like short-term image retention and variable brightness based on how much of the display is illuminated — limitations of the tech, not the TV. Default color calibration might be meh, but it configures up nicely, and input latency was around ~21ms in game mode, which is pretty good for a large-format display.

Out of stock: This pretty incredible deal is no longer available.