OnePlus has been quite prolific at pushing out fixes for its latest flagship, and another update for the 7 Pro is starting to roll out as we speak. OxygenOS 9.5.7 includes a huge pile of camera improvements and tweaks, as well as a fix for the recent "ghost" or "phantom" touch problem which could cause random and annoying taps at the top of the screen for some phones in certain circumstances.

It isn't clear if this also resolves the issue with the 7 Pro rejecting touch input at the top corners, as the changelog is a bit vague on the details.

We can't independently confirm that the issue is fixed just yet, the update is currently in a limited rollout, but reports from those that have installed it indicate it does fix the problem. The full changelog published to the relevant thread on OnePlus' product forums is included just below:

Other non-camera tweaks include an "optimized" Double Tap to Wake and fixes for ambient display and voice call quality in third-party apps.

Camera improvements include a less noisy HDR photos (an issue we can attest to), a fix for the green cast in some low-light photos, better white balance, and better color in photos. "Clarity" and noise for both the ultra-wide and telephoto camera should also be improved, and the mostly useless Nightscape mode should will also get some much-needed enhancements.

If the camera differences are significant, expect follow-up coverage with photo samples once we've had a chance to see for ourselves. We've been working on a few OnePlus 7 Pro camera-related features, but the rapid pace of updates and camera improvements has held back detailed comparisons. (At least we have a wealth of examples for any future testing.)

OnePlus has beaten us to the punch, publishing a series of carefully chosen pre- and post-update camera samples. Take these with a proverbial grain of salt, and not all the results are objectively better in every way, but the improvements seem real. (Click/tap to zoom)

We can't tell if this is a general low-light or Nightscape comparison, but improvements to either should please Artem.

Color and saturation in the recent update for this photo look nicer, but there's no way to know if it's objectively more accurate to the scene in this comparison. Notice detail is also being lost in the tall building to the top left.

Contrast and color look better here, but again, we can't tell which is more true to life.

My most major complaint about the 7 Pro's camera was how unrealistically bright it would make photos taken in cloudy weather or indirect lighting, and though you could drag to adjust the exposure compensation a bit, it was annoying to have to do. These comparisons make it seem like that isn't necessary anymore.

Ditto the above, brightness and contrast seem better compared to my familiarity with the camera's performance, but there's no way to tell from these photos how the scene looked in real life.

Inconsistently long exposures in low-light circumstances could sometimes obscure details, but this comparison could imply that might be fixed — though it could just be showing improvements in software sharpening when it comes to the standard or wide-angle camera's performance. 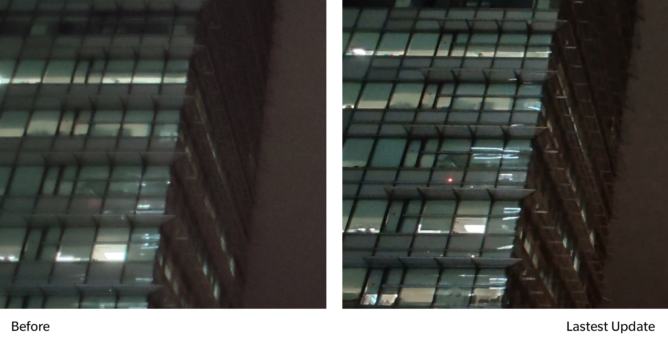 I'd like to hope this is a crop of the image further above, but it may just be a comparison of the telephoto camera showing more aggressive sharpening in processing, possibly paired with slightly improved focus.

Again, these comparisons were undoubtedly chosen show dramatic improvement, but OnePlus has definitely committed itself to enhance its flagship's camera with time, and the weekly updates attest to that. I can think of no other OEM in recent memory which has made such an effort to improve its camera based on the specifics of consumer feedback so quickly after launch. Time will tell if it pays off.

The company has also put together a survey composed of a series of blind comparisons between the 7 Pro and other recent major flagships, including the Pixel 3 XL. The survey was created to better understand what consumers prefer when it comes to a camera's performance, likely so the company can tune its own results to match that of specific competitors if they're considered better — even if it's not objectively true to life. After all, previous polls like those conducted by MKBHD have shown people often prefer oversaturated and brighter photos to more accurate ones.

The latest update for the OnePlus 7 Pro is now available for download. It'll bring your phone up to version number 9.5.7.GM21AA and the file weighs in at 1.99GB. It includes fixes for the screen's touch sensitivity and many camera improvements (read about those above), among others. Head to the OnePlus site to download it now.

Chromecasts and Assistant speakers keep disappearing from the Google Home app for some, making ...