This might seem like wishful thinking at best, but hear me out: Google should make a photo editor. I'm not talking about the simple crop-and-filter tools built into Google Photos, but a "real" raster graphics editor with layers and more flexibility, not just to enhance the already great camera chops of the company's Pixel phones, but to help with modern productivity. The nature of work has been changing since the productivity side of G Suite — Google Docs, Sheets, Slides, and Drive — landed back in 2012, and in 2019 many modern workflows can't be completed without graphics or photo editing. Ergo, I think Google should make one for the web as part of G Suite.

Part of this desire comes from my love of Chromebooks. I think that for many workflows, Chrome OS is the best portable platform out there when it comes to productivity, primarily if you are used to working entirely in the web. The heavy integration of things like Google Drive into Chrome OS is a massive benefit to those willing to use nothing but Google services. But while most of the platform's (few) gaps can be plugged with web or Android apps, and while Linux compatibility via Crostini can provide plenty of tools that have yet to be rewritten in Javascript, it isn't the same as the relatively "native" experience of Google's web services.

The most common complaint I hear about Chromebooks when speaking to my fellow bloggers is that there's no photo editor. At one time that was true, but I'd say that argument is just regurgitated bullshit in 2019. We have GIMP for Linux running in Crostini, sites like Photopea, and plenty of Android apps — yeah, those last ones are pretty garbage (looking at you Lightroom, not to mention the useless pile of Photoshop apps), but they're there for quick edits, or if you refuse to learn GIMP. When it boils down to it, my spoiled fellows don't want "a photo editor," they only want the relative simplicity of Adobe's Photoshop, because that's what they know. Unfortunately for them, it won't run on Chrome OS, wouldn't offer the same integration as Google's services if it did, and it comes with its own (rising) costs.

There was a time that the only way to get any decent productivity application outside open source offerings was by paying. Microsoft Word (and, to a lesser degree, WordPerfect) was synonymous with writing for decades, and its full suite of applications was among the default software most considered essential for a professional environment when purchasing a computer. Then Google's free, cloud-based offerings launched in 2012 and destroyed Microsoft's near-captive market. G Suite — including Google Docs, Sheets, Slides, and Drive — has entirely taken over the education market, and they're used by tons of the big names in business.

Plenty of presentations in 2019 from guys in suits to guys in suits happen in Google Slides, not PowerPoint; many spreadsheets calculating multi-million sales metrics or worldwide marketing demographics are made in Google Sheets these days; and Google Docs covers everything from an armchair blogger's latest editorial (yo) to documentation and reports. G Suite's free-for-consumer services are taking over. 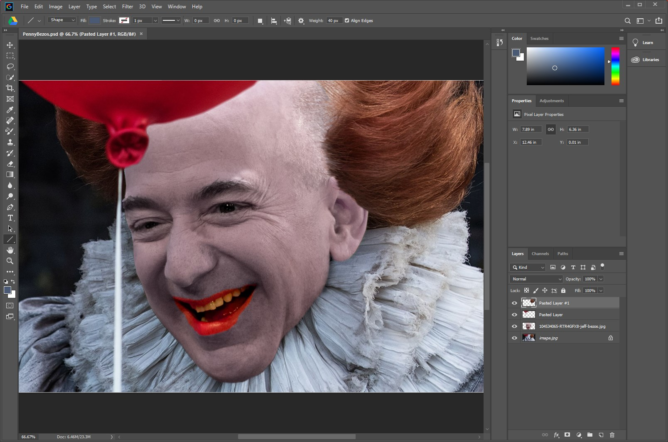 More than ever, though, business involves a lot more than simply writing a report, crunching numbers in a spreadsheet, or tossing together a presentation for Friday's meeting. Whether you are a blogger, researcher, or analyst, more and more work requires accompanying visuals. Simple photo manipulation, composite edits, or attention-grabbing graphics are no longer just the purview of the cigarette-smoking creative department relegated to the lower floors. And drag-and-drop use of copyrighted material surreptitiously pulled from searching Google Images isn't just a bad idea, the company is actively trying to prevent people from doing it. I think it could do a lot more to mitigate all of these concerns by building a graphics editor of its own.

I know, a photo editor might be a bit of a departure for Google, but I don't think it's that far out of left field. When it comes to productivity apps and services in 2019, simple photo and image editing is a pretty fundamental requirement in a lot of professional environments. And really, it's not that much of a departure for the company. Google bought Snapseed back in 2012, and it's a pretty decent (if exceedingly simple) touch-up editor for Android and iOS. Why not expand that same branding and give us Snapseed for the web?

The excellent Photopea is proof that you can have a decent photo/graphics editor that lives solely online, so it's feasible, and a Google-made editor with G Suite/Drive integration would complete a total workflow for a whole lot of people. It would also help eliminate any lingering (if frankly wrong) argument regarding photo editing on Chromebooks, as there would be a first-party solution that benefits from the same deep integration of Google's services that Drive and Docs see.

In the meantime, GIMP, Android apps, and Photopea can handle the job on my Pixelbook (plus our own Corbin Davenport's web app PhotoStack for watermarks), though a Drive-integrated, first-party solution would fit perfectly not just into the G Suite services lineup, but into my own workflow.

Think about it, Google.

Chromecasts and Assistant speakers keep disappearing from the Google Home app for some, making ...