Android Q Beta 4 came out earlier today, and though there don't seem to be as many new things as with prior Beta releases, it's nice to have notification swiping as God intended and the rotation lock button back. However, it's not all good news; some people are reporting issues with bootlooping when attempting to update to Q Beta 4, primarily those with Pixel 2 XLs.

We first noticed the bootlooping issue when a number of commenters in our Q Beta 4 announcement post brought it to light. All of the commenters seemed to be using Pixel 2 XLs, though others with P2XLs were able to update without any fuss. However, we also received a tip from a reader with a Pixel 3 that had the same problem, so this matter isn't exclusive to 2 XLs.

One user on the r/android_beta subreddit found that a factory reset would resolve things, though it obviously causes all of your data to be lost. Another user said that a factory reset isn't necessary and instructed those stuck in bootloops to restart, go to recovery mode, and reboot from there, though people seemed to have varying levels of success with that method.

Long story short: if you have a Pixel phone, especially a 2 XL, and plan to update to Android Q Beta 4, be aware that you may have to perform a factory reset.

Following these reports, the Android team has paused the OTA rollout of the Android Q Beta 4 to investigate the issue. I hadn't had the time to update my Pixel 2 XL yesterday and, sure enough, checking for updates now returns nothing to install. Thanks, Armando, Brenden! 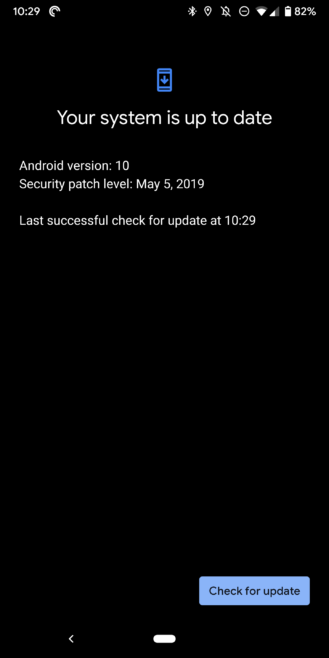 New factory and OTA images have also been posted, if you'd prefer to manually flash your way to the latest version.

We’ve resolved the issue affecting some users when updating to Beta 4 and we’re resuming updates. All enrolled devices will receive a new Beta 4 update to QPP4.190502.019 (even those with Beta 4 QPP4.190502.018 installed). We’ve also updated downloadable images for developers. pic.twitter.com/7xxCemrfXa

Android Studio will discontinue updates for 32-bit PCs this year

Dropbox gets a makeover with updated desktop app, new Slack and Zoom integration