When it comes to the most popular internet browsers, Microsoft Edge isn't exactly at the top of the list, but Google Chrome could be getting one of its features. Edge has a feature that allows you to preview the contents of a tab by hovering over it to show a screenshot without having to visit the tab itself. Google has added two new flags to Chrome Canary that suggest a similar feature could be on its way.

Two new flags have appeared in the Canary channel of Chrome that generate a preview image of the contents of an open tab when a user hovers over it. If the flag ‘Tab Hover Cards" (chrome://flags/#tab-hover-cards) is enabled, Chrome will display a popup containing the information about that tab. The second flag, "Tab Hover Card Images" (chrome://flags/#tab-hover-card-images) claims to enable a screenshot also to be displayed with the contents of that tab when you hover over it, but it doesn't seem to be working, yet.

While the flags have appeared, the feature isn't fully ready yet in Chrome Canary. Even with the two flags enabled, an image isn't generated when hovering over a tab, and only an information popup is displayed.

Hovering over a tab in Canary reveals a text description, but no image.

For some perspective of how it might appear when it does finally go live in Chrome, here's what a similar feature looks like in Microsoft Edge where an image preview is displayed under a tab:

It seems as if Google has laid the foundation for an image preview of a tab with the new flags, but it appears to be a work in progress since it is just text right now. The images will presumably begin working as the build graduates to the Chrome Stable channel, but for now, we'll have to settle for text. Nevertheless, as someone who always has a ton of tabs open, I'm glad to see a useful feature that will make tab management that little bit easier. 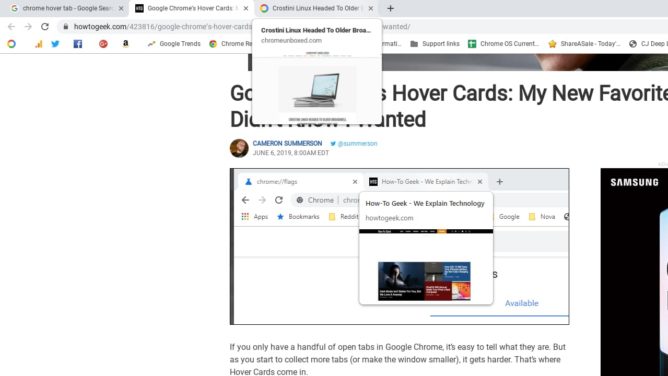 Before Chrome's tab hover previews can come to the stable build, they need to pass through the Beta channel, and that's exactly what's happening right now. As reported by Chrome Unboxed, Chrome Beta now has tab hover previews that are looking more like the finished article, including an image that shows you what's in the selected tab. It shouldn't be too long before these come to the official public version of Chrome, and it'll make navigating multiple tabs so much easier.

Flags also available for use in the Chrome Stable channel 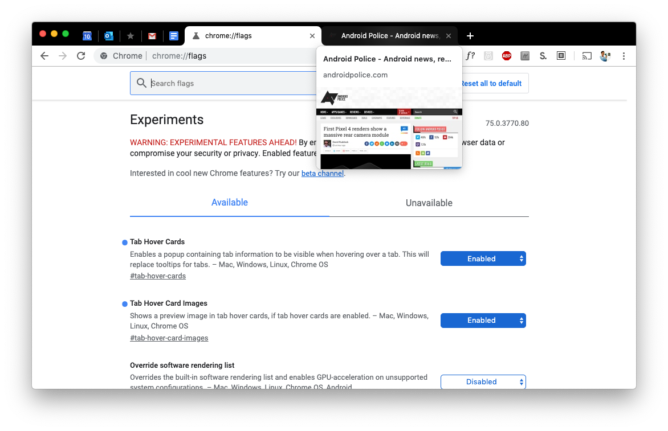 Further to our update about flag hover cards being available in the Beta channel, it seems the flags are also there to be tried in the Stable channel. Go to chrome://flags and search "hover" to see the two cards relating to this (in the image above) and enable both to give it a go. They are still disabled by default, for the time being.