Google has embedded eSIM capability into its Pixel 2 and Pixel 3 handsets, so users could choose between using a physical chip or a virtual one. Unfortunately, the option was limited to registering one or the other on the network, but not both at the same time. With Android Q, the company is bringing (limited) dual-SIM support to its latest flagship, so you can simultaneously connect both the physical and eSIM to the cell towers. 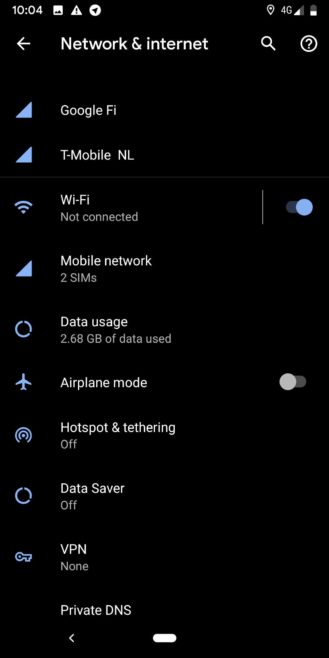 Android Q now natively lets users pick which module to use for calls, messages, and data, a feature manufacturers previously had to implement themselves. However, as the Pixel 2 and 3 only support Dual SIM, Dual Standby (DSDS), owners will still have to select an "active" SIM, as the technology doesn't allow for both to work concurrently. Nevertheless, it appears the operating system will support Dual SIM, Dual Active (DSDA) out of the box, which means phones that come with the feature should be able to have two active SIM modules at the same time.

Based on our readers' input, we wanted to clarify the way DSDS works: The technology allows for both SIM modules to be simultaneously registered on the network, but they can't be active at the same time. In everyday usage, this means you'll have to select the active SIM card for data, but will still receive calls and messages on both numbers. The main limitation of DSDS versus DSDA if the inability to place calls concurrently, which most people will rarely need to do.

The Android Q Beta 2 brings a far more functional dual-SIM mode that doesn't keep switching between the two SIMs like the previous release. In fact, the device will now tell you it can simultaneously connect to two networks and will show two signal indicators in the notification tray, should you chose to activate it. As with any DSDS device, you'll have to pick which SIM to use for data and can also set your preferred line for outgoing calls and texts. 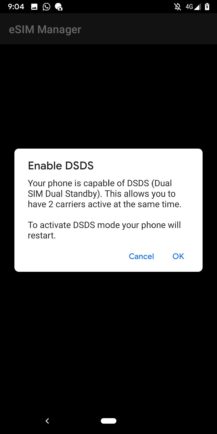 If the option isn't showing for you, you'll have to activate it in the developer menu feature flags before heading to your networking settings.

Despite Beta 2 bringing full support for DSDS, users have reported they can no longer access the toggles to activate the functionality in Beta 3, whether it's through feature flags or the *#*#4636#*#* menu. However, it seems DSDS still works if it was activated prior to updating to the new version, but there's no way to turn it on or off anymore. Let's hope this is something Google will fix in the stable release, as people were quite thrilled about getting dual-SIM support on their Pixels.

Even though the DSDS settings were nowhere to be found in Beta 3, the feature continued to work if it had been previously activated. Unfortunately, support is now completely gone with the latest update, as users cannot use the functionality even if it was previously enabled. This is very disappointing, as many Pixel 3 users were thrilled to benefit from dual-SIM support on their devices. We're not sure whether Google has preferred to remove the feature from its operating system entirely, or whether it'll bring it back in the final build while it works on some improvements. I'm really hoping it'll come back in the official release, as otherwise they would be taking back something that seemed to work just fine.

[Update: Possibly fixed] Google Homes are having an identity crisis as Assistant mixes US and ...